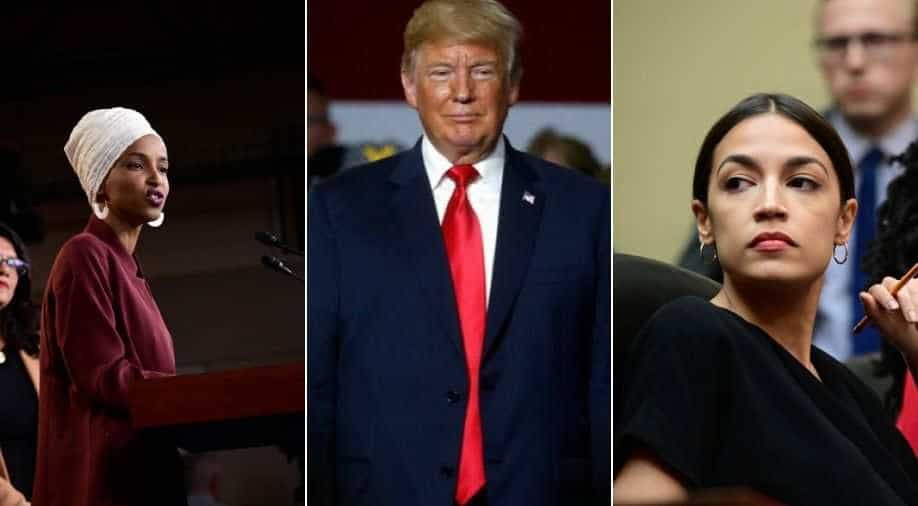 All four of the first-term House members are US citizens and all but one were born in the United States.

President Donald Trump doubled down on his attacks against four minority US congresswomen on Monday and dismissed concerns that his comments were racist, prompting outrage from Democrats, who moved to condemn him in the House of Representatives.

Speaking at the White House, Trump said people he described as critical of the United States should leave the country.

Those remarks followed his Twitter messages on Sunday that said the four left-wing lawmakers, known in Congress as "the squad," should go back to "the totally broken and crime infested places from which they came."

All four of the first-term House members are US citizens and all but one were born in the United States.

"If you're not happy in the US, if you're complaining all the time, very simply: You can leave," he said, drawing scattered applause from a crowd of businesspeople.

Asked if he was concerned that some viewed his remarks as racist and that white supremacists found common cause with him, Trump said he was not. "It doesn`t concern me because many people agree with me," Trump said. The president`s remarks were widely derided and some, though not many, of his fellow Republicans spoke out against them.

Trump did not identify the lawmakers by name in his Sunday tweets, but he appeared to refer to representatives Alexandria Ocasio-Cortez of New York, Ilhan Omar of Minnesota, Ayanna Pressley of Massachusetts and Rashida Tlaib of Michigan.

All four have been critical of Trump, as well as of the current Democratic leaders of the House, straining party unity in that chamber.

At a press conference on Capitol Hill, the four lawmakers said Trump was trying to sow division and distract attention from what they characterized as failed policies on immigration, healthcare and taxation.

"Weak minds and leaders challenge loyalty to our country in order to avoid challenging and debating the policy," Ocasio-Cortez said.

Tlaib and Omar repeated their calls for Trump to be impeached.

House Speaker Nancy Pelosi, who has been criticized by members of "the squad," said her party would introduce a resolution condemning Trump`s "xenophobic tweets."

A draft of the resolution, seen by Reuters late on Monday, said the House "strongly condemns President Donald Trump`s racist comments that have legitimised and increased fear and hatred of new Americans and people of colour ..."

Representative Steny Hoyer, the No. 2 Democrat in the House, told reporters the resolution could be on the House floor for debate as soon as Tuesday.

Such a resolution could put Trump`s fellow Republicans in Congress in an awkward position, forcing them either to vote against their party`s leader, who has strong support among conservatives, or effectively to defend his statements.

Trump's attacks elevated the profiles of the four progressive Democrats, who have helped push the party`s agenda to the left, causing concern among Democratic moderates who are eager to hold onto their seats in the 2020 election.

A few Republicans speak out

Trump has a history of what critics consider race-baiting. He led a movement that falsely claimed former President Barack Obama was not born in the United States, and he said after a deadly, white supremacist-led rally in Charlottesville, Virginia, that "both sides" were to blame for violence there.

"This is the agenda of white nationalists, whether it is happening in chat rooms, or it's happening on national TV, and now it`s reached the White House garden," Omar said.

Texas Representative Will Hurd, the only African-American Republican in the House, called the attacks "racist" on CNN.

Tim Scott, the Senate's only black Republican, called them "racially offensive" on Twitter.

Others did not go that far. Senator Mitt Romney, the party`s 2012 presidential nominee, and Senator Marco Rubio, who ran in 2016, both condemned the remarks but declined to characterize them as racist.

House Republican Leader Kevin McCarthy said the four lawmakers belonged in the United States, but did not criticise Trump. "The president is not a racist," he told reporters.

Senate Republican Leader Mitch McConnell did not comment on the controversy.

Trump regularly used racially charged language during his campaign and continued in his presidency. His latest remarks came as some of his efforts to deal with immigration - a major issue for his conservative base - have faltered.

Trump promised as a candidate to build a wall along the U.S.-Mexico border and that Mexico would pay for it. As president, very little has happened on wall construction and Mexico has resolutely refused to pay for a wall.

In his Sunday tweets, Trump said of the four congresswomen, "Why don`t they go back and help fix the totally broken and crime infested places from which they came ... Then come back and show us how ... it is done."

Ocasio-Cortez, Pressley and Tlaib were born in the United States while Omar, a Somali refugee, arrived in 1992.

Republican Senator Lindsey Graham, a sometime Trump golf partner and adviser, called the four congresswomen "communist" and "anti-Semitic" on Fox News on Monday, but he also called on Trump to stop making such personal attacks.

"Aim higher ... Take on their policies. The bottom line here is this is a diverse country," he said, adding that he had spoken to Trump.