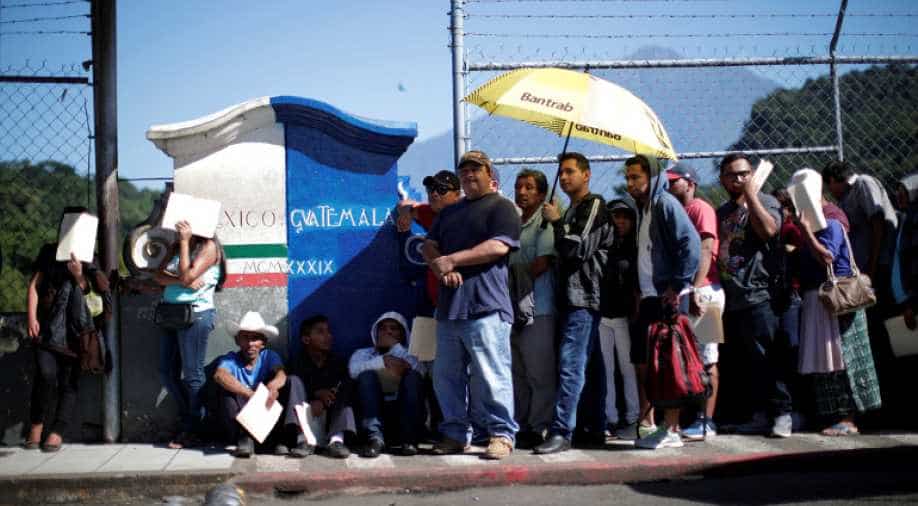 The Trump administration moved on Monday to declare most migrants who cross the US southern border after passing through Mexico ineligible for asylum.

A new rule redefining asylum eligibility - to take effect on Tuesday - is the latest attempt to stem the flow of undocumented migrants into the country, and comes amid White House frustration at Congress's failure to toughen immigration laws.

"The United States is a generous country but is being completely overwhelmed by the burdens associated with apprehending and processing hundreds of thousands of aliens along the southern border," Attorney General Bill Barr said in a statement.

"This rule will decrease forum shopping by economic migrants and those who seek to exploit our asylum system to obtain entry to the United States," Barr added.

The White House's new rule targets the recent stream of hundreds of thousands of migrants from Central America and other countries who have tried to cross into the United States from Mexico and request asylum to gain a foothold inside the country.

These requests - increasingly made by families claiming to flee endemic violence and poverty in their countries - allow the applicants to remain in the United States and to move around freely while their cases are adjudicated, which can take two years.

Many disappear into the country and never appear in court for their hearings, immigration officials say.

Acting Homeland Security Secretary Kevin McAleenan said the move, labelled an "interim rule" in lieu of action by Congress, was necessary because previous efforts to change immigration laws to stem the flow of migrants had proven inadequate.

"Until Congress can act, this interim rule will help reduce a major 'pull' factor driving irregular migration to the United States... leading to fewer individuals transiting through Mexico on a dangerous journey," McAleenan said.

The rule includes exceptions for people who can demonstrate they are victims of torture or persecution.

But US immigration officials have made clear they consider most of the recent migrants from Central America to be economic migrants, and thus not qualified for asylum.

The rule could quickly run into legal challenges that have repeatedly stymied the White House's efforts to slow the number of migrants entering the country without documentation.

Most are families from Guatemala, Honduras and El Salvador.

But increasingly migrants from other countries, including rising numbers from South Asia and Africa, are taking the same route through Mexico to the US southern border.

And meanwhile, the large numbers of migrants crossing the US border has overwhelmed the capacity of officials to house and care for them, with many, including children, being held in squalid conditions for weeks as they await processing.

The Trump administration has pressured Mexico and Guatemala, on Mexico's southern border, to accept migrants' asylum requests in their countries but both have resisted.

Later on Sunday, the country's constitutional court imposed an injunction on Morales sealing any deal, saying it first needed the approval of lawmakers, some of whom say it would make their country a dumping ground for migrants heading to the US.

Former foreign minister Edgar Gutierrez told the daily El Periodico that the deal would have made Guatemala, one of the region's poorest countries, "the biggest concentration camp in history."