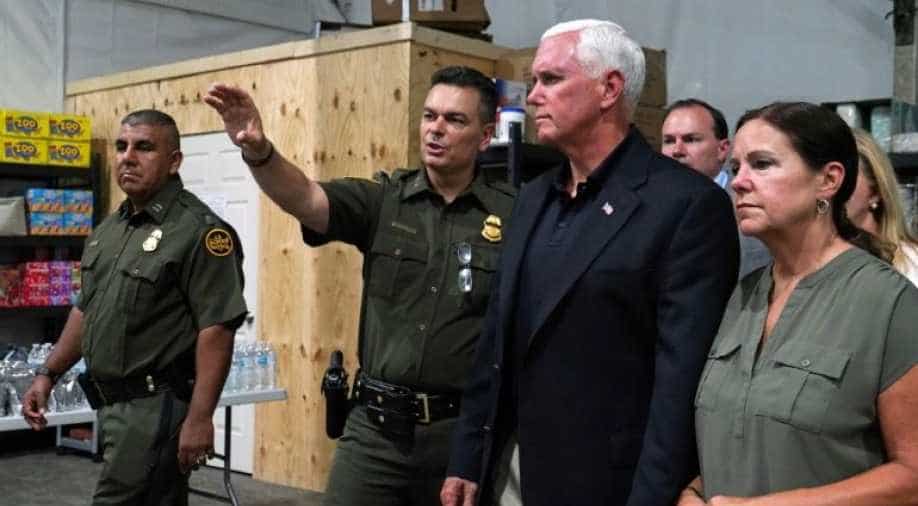 The cages were so crowded, according to the reporter, that it would have been impossible for all the men to lie down at the same time.

Vice President Mike Pence viewed an overcrowded, foul-smelling facility in Texas on Friday where nearly 400 men are detained after being accused of crossing the US border illegally.

Some 384 single men were corralled behind metal fences inside the sweltering facility in McAllen, according to a pool reporter on the scene. The men did not have mats or pillows and some were sleeping on concrete.

The cages were so crowded, according to the reporter, that it would have been impossible for all the men to lie down at the same time.

Some of the men said that they had been there for 40 days or longer, were hungry and wanted to brush their teeth. Some agents guarding the cages wore face masks.

Water was available outside the fences, the pool reporter said, citing agents who said the men had access to the water when journalists were not present.

After visiting the facility, Pence said at a news conference that he was not surprised by what he saw.

"I knew we'd see a system that was overwhelmed," Pence told reporters. "This is tough stuff."

A patrol agent, Michael Banks, said the men were allowed to brush their teeth once a day. "We currently have 88,000 toothbrushes," he said.

Many of the men had not showered for 10 to 20 days because the facility did not previously have showers, according to Banks, who said it now had a trailer shower. Banks said the longest any man had been at the facility was 32 days.

The men were given three hot meals a day from local restaurants but could not have cots for sleeping because there was not enough room for them.

Another 275 women were living in repurposed Army tents, he said.

Pence said the centre at McAllen was a "prime example" of why the United States must secure its borders.

"The facility is overcrowded and our system is overwhelmed. It is time for Democrats in Congress to step, do their jobs, and end this crisis," Pence wrote on Twitter.

President Donald Trump, a Republican, has made cracking down on illegal immigration a centrepiece of his administration, which is trying to deal with a surge of mostly Central American families crossing the US-Mexico border.

Inside, migrants lay on tinfoil-like blankets and some children watched television. Two of the children said they had walked for two to three months before arriving at the facility.