As migrants wait in fear, no sign of large-scale US raids 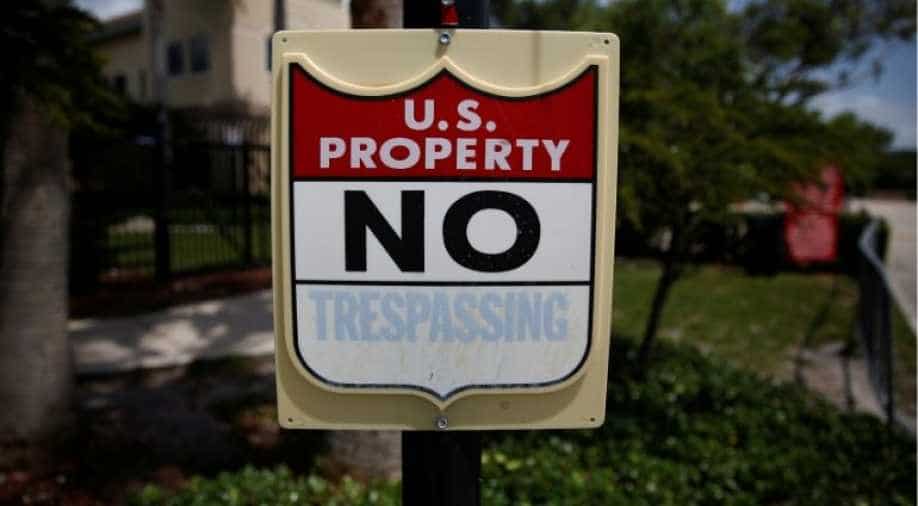 A 'US Property No Trespassing' sign is seen at Immigration and Customs Enforcement (ICE) facilities. Photograph:( Reuters )

The operation appears far more modest than the 'millions' Trump had promised would be detained and expelled when he first mentioned the raids last month.

Thousands of undocumented immigrants waited in uncertainty on Sunday, fearful of the nationwide raids promised by President Donald Trump, but there were no immediate signs of any large-scale operations.

Even as news media said the raids were underway, Trump added to the divisive debate on migration, suggesting on Twitter that some Democratic Congresswomen should "go back" to their countries of origin.

Federal Immigration and Customs Enforcement (ICE) agents were expected to conduct raids in at least 10 major cities Sunday, with plans to arrest about 2,000 undocumented migrants who entered the United States recently.

The operation appears far more modest than the "millions" Trump had promised would be detained and expelled when he first mentioned the raids last month.

Matthew Albence, ICE's acting director, would not confirm any operational details on Sunday, but defended the need for the raids.

"We are doing targeted enforcement actions against specific individuals who have had their day in immigration court and have been ordered to be removed by an immigration judge," he told "Fox News Sunday."

"We are merely executing those judges' orders."

Activists patrolled the streets of several of major cities to document any arrests and offer assistance to anyone detained.

But while there were scattered reports of possible ICE activity, there were no signs of a large-scale sweep.

New York Mayor Bill de Blasio said he had heard of three ICE raids Saturday, but none resulted in arrests.

In Florida, ICE agents were seen knocking on doors near Miami International Airport and in a nearby migrant farming community, the Los Angeles Times reported, but no arrests were reported.

The Washington Post and Baltimore Sun reported little evidence of any large-scale ICE operations. The Sun said few immigrants were seen around Baltimore on Sunday.

The Atlanta Journal-Constitution said authorities in that city had reportedly rented vans for use in raids.

Meanwhile, those likely to be targeted were living in uncertainty.

Adding to their concerns were reports that ICE agents are prepared to scoop up not just those named in removal orders but others whom agents might come upon incidentally, potentially including migrants who have been in the country for years.

Trump said earlier that it was unfair to those seeking to enter the country legally that others simply walk across the border and enjoy the privileges of American life.

Conservative commentators have pressed for tougher action by Trump, pointing out that the Democratic administration of Barack Obama expelled 409,849 people in 2012, compared to the 256,085 expelled under Trump last year.

Ken Cuccinelli, the acting director of US Citizenship and Immigration Services, defended the raids.

Local and state officials have called on the federal government to show restraint, and several accused Trump of using the operation for political gain.

On Friday Trump insisted that "most mayors" wanted the raids because "they don't want to have crimes in their cities" -- repeating his frequent but incorrect assertion that migrants are more likely to be criminals than native-born Americans.

De Blasio told CNN on Sunday that the millions of undocumented people in the US are "core to our economy and part of our community" and he accused Trump of using the raids "to foment division."

"What he's doing with our ICE agents is not about securing our borders. It is an electoral effort by President Trump."

Some city officials and pro-migrant groups have sought to educate those who might be targeted about their rights.

If "someone comes to your door," Atlanta Mayor Keisha Bottoms said on CNN, "please don't open the door unless they have a warrant."

Trump drew an angry reaction from Democrats on Sunday by saying on Twitter that unnamed progressive Congresswomen should "go back" to the "totally broken and crime-infested places from which they came."

The political parties have been wrangling over the conditions facing migrants in badly overcrowded federal detention centres.

Reporters and lawmakers have described detention centres where people sleep on concrete floors and live in filthy conditions.

US officials have acknowledged the overcrowding but insist they are doing their best to provide decent conditions.

The United States has been struggling with the migration crisis on its southern border, as thousands of people stream into the US, mostly from Central American countries struggling with violence and poverty.

More than 100,000 undocumented people arrived last month -- down 28 per cent from May but still a "full-blown emergency," according to the Department of Homeland Security.