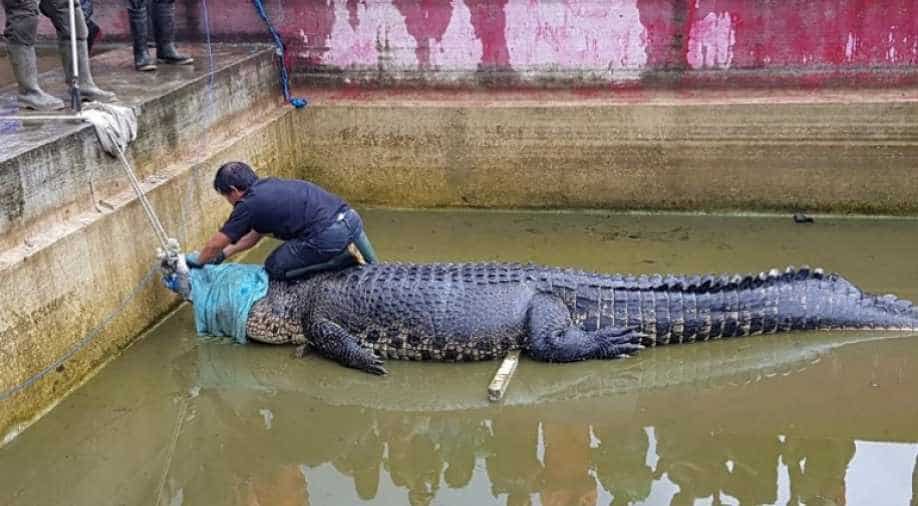 4.4 metre long crocodile named Merry being secured before being taken out of its enclosure in Minahasa. Photograph:( AFP )

An Indonesian woman has been mauled to death by a huge pet crocodile on the island of Sulawesi, officials said Wednesday.

Deasy Tuwo, the head of a laboratory at a pearl farm in Minahasa in North Sulawesi, was killed by the 4.4-metre (14-foot) reptile last Thursday, authorities said.

"The indication is that she fell into the crocodile's enclosure," he said, adding the incident was still being investigated by police.

The crocodile, named Merry, had eaten one of the woman's hands and most of her abdomen was missing, Rundengan said.

"These parts may still be inside the crocodile now," he added.

The giant reptile was sedated and removed from its enclosure Monday in a three-hour operation that involved dozens of people, including conservation officials, the army and police.

The reptile, which was owned illegally, will be transferred to a conservation area, Rundengan said.

The Indonesian archipelago is home to a vast array of exotic wildlife, including several species of crocodile that regularly attack and kill humans.

In April 2016, a Russian tourist was killed by a crocodile in the Raja Ampat islands, a popular diving site in the east of the archipelago.