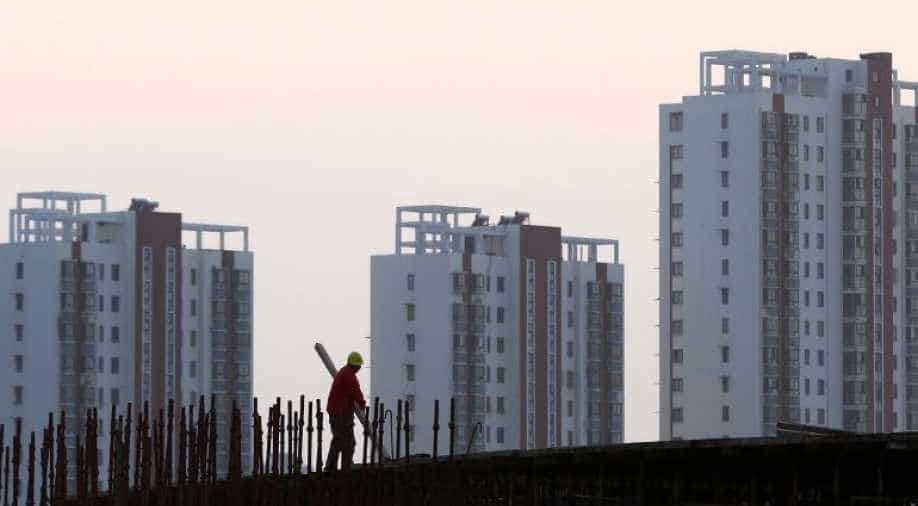 A worker stands on the scaffolding at a construction site against a backdrop of residential buildings in Huaian, Jiangsu province, China. Photograph:( Reuters )

Second-quarter growth was seen cooling to 6.2 per cent from a year earlier, the same as in the previous poll, from 6.4 per cent in the first quarter. China will post its second-quarter gross domestic product (GDP) on July 15.

China's economic growth is expected to slow to a near 30-year low of 6.2 per cent this year, a Reuters poll showed on Wednesday, despite a flurry of support measures to spur domestic demand amid a bruising trade war with the United States.

The median forecast was unchanged from the last poll in April.

But a stream of downbeat data in recent months and higher US tariffs have fanned expectations that Beijing will need to roll out more stimulus soon to ward off a sharper slowdown that could stoke job losses.

Second-quarter growth was seen cooling to 6.2 per cent from a year earlier, the same as in the previous poll, from 6.4 per cent in the first quarter. China will post its second-quarter gross domestic product (GDP) on July 15.

Most of the 72 institutions covered in the survey expect growth will remain at 6.2 per cent for the rest of this year, compared with expectations for a tick-up to 6.3 per cent in the previous poll.

Zhang Yiping, the senior economist at Merchants Securities in Shenzhen, said he expected the US tariff hike in May on $200 billion of Chinese goods to weigh on growth in the second half.

But Zhang said authorities are likely to stick to more moderate policy easing, rather than resorting to more aggressive measures.

"We expect policy this year would focus more on building a floor to underpin the economy, rather than to boost growth," he said.

So far, China's stimulus measures have been more restrained than in past downturns, which analysts attribute to fears of adding to a mountain of debt left over from past credit binges.

But the central bank governor reportedly said last month that there is "tremendous" room to adjust policy if the trade war worsens.

The full-year forecast would be nearing the lower end of the government's 2019 target range of 6-6.5 per cent, and would mark the weakest pace of growth China has seen in 29 years.

Growth next year will likely cool further to 6.0 per cent, the poll showed.

Beijing has been relying on a combination of fiscal stimulus and monetary easing to weather the current slowdown, including hundreds of billions of dollars in infrastructure spending and tax cuts for companies.

But the economy has been slow to respond, and investors fear a longer and costlier trade war between the world's two largest economies could trigger a global recession.

US President Donald Trump told counterpart Xi Jinping late last month that he is putting threatened additional levies on hold as they agreed to get trade negotiations back on track.

But Washington sharply raised tariffs on $200 billion of goods from China in May, which remain in force, and no timeframe was set for the talks.

"Trade frictions would remain in the long run despite the truce reached last month. We expect the standoff to morph into more forms such as a tech war, to put further strain on China's economy," Zhang added.

Capital Economics believes China's fiscal policy will become even more supportive, which would be most likely achieved by relaxing constraints on off-budget borrowing.

"We now expect our estimates of the augmented fiscal deficit, which includes off-budget borrowing, to widen in the coming quarters and average 8 per cent of GDP this year, up from 6.4 per cent in 2018."

The government has announced a rise in its budget deficit to 2.8 per cent of GDP this year from 2.6 per cent in 2018.

Analysts in the latest Reuters poll expect the People's Bank of China (PBOC) will ease policy further this year.

But they do not expect it to cut its benchmark lending rate, as it repeatedly did in past downturns.

Separately, some other China watchers have recently raised the possibility of cut in the PBOC's benchmark or one of its short-term rates if the US central bank starts easing policy as soon as this month.

Analysts forecast two more RRR cuts of 50 basis points each in this quarter and the last quarter.

Economists expect the central bank to keep its benchmark rate unchanged at 4.35 percent through at least the end of 2020.

The poll also predicted annual consumer inflation will pick up to 2.3 per cent in 2019, quickening from 2.1 per cent estimate in the April survey, but below the government target of around 3 per cent.