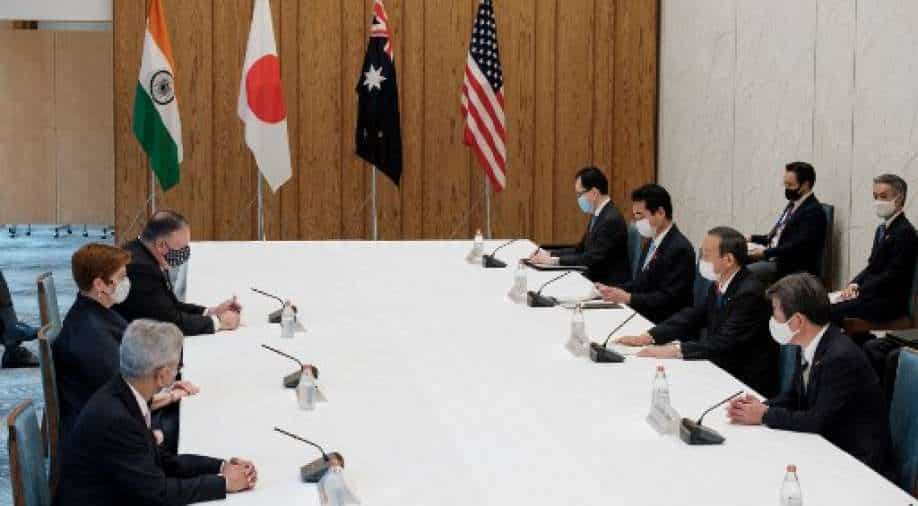 China on Wednesday lambasted against the upcoming Quad Foreign Ministers' meeting on Friday and accused the members, including India and US, of creating a bloc confrontation and having a “cold war mentality.”

"We oppose exclusive blocs to create bloc confrontation,” Lijian said while answering a question on the Foreign Ministers' meeting of the Quad.

"We hope that the US and relevant countries can get a clear picture of the situation, feel relaxed, abandon the Cold War mentality, stop driving wedges between regional countries and contribute to regional peace, stability and prosperity,” he said.

The Quad came into being in November 2017, when the US, Australia, India and Japan gave shape to the long-pending proposal of setting up the Quad to develop a new strategy to keep the critical sea routes in the Indo-Pacific free of any influence, amidst China's growing military presence in the strategic region.

The foreign ministers from the four countries will be participating in the Quadrilateral Security Dialogue in Melbourne on Friday.

India’s Ministry of External Affairs (MEA) said that it will be an opportunity for the ministers to follow up on their virtual meeting held in February last year and exchange views on regional strategic issues given their shared vision of a free, open and inclusive Indo-Pacific region.

The Quad meeting comes amid heightened tension over Russia’s military buildup on the Ukrainian border.

The four countries are expected to reaffirm the importance of the rules-based order and discuss the challenges posed to it by China, said Daniel Kritenbrink, the assistant secretary of state for East Asian and Pacific affairs while speaking to reporters in Washington on February 4.

He also said the Ukraine situation, in which it is feared Russia will further invade its neighbouring country, could be a topic to be dealt with in the Quad context, given that the four countries are key democracies in the Indo-Pacific and the issue involves a threat to the rules-based global order.

“In this era of intense competition, changing strategic landscapes, economic coercion and, of course, this very difficult global pandemic, there is no greater global partnership than what we’re trying to accomplish through the Quad,” the official said.

The last Quad foreign ministerial meeting held in person was in October 2020 in Japan. The leaders of the Quad met at the White House in September last year, and Japanese Prime Minister Fumio Kishida is planning to host the next summit in his country in the spring.