California mudslide death toll up to 15 as rescues continue 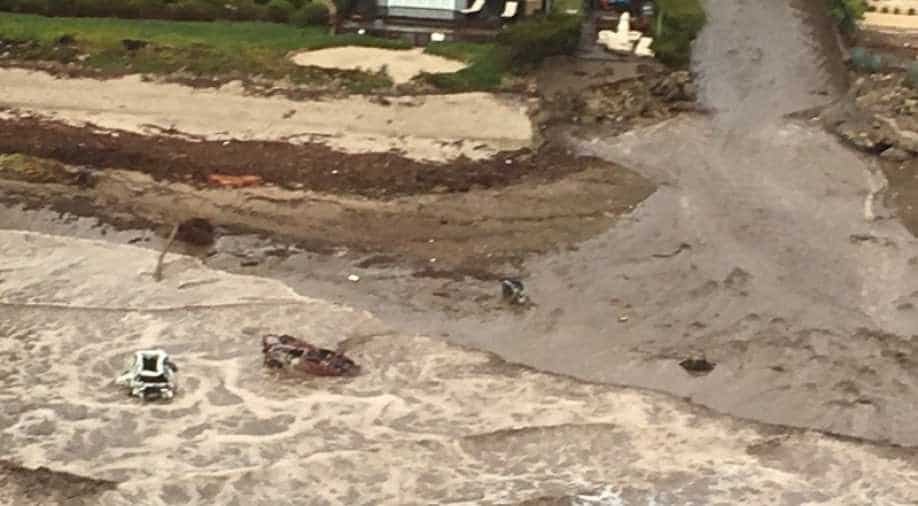 An aerial view from a Ventura County Sheriff helicopter shows a site damaged by mudslide in Montecito, California Photograph:( Reuters )

California rescuers worked through the night plucking stranded Santa Barbara residents from mudslides that have killed at least 15 people and devastated the coastal community after it was drenched by rain, authorities said on Wednesday.

The death toll could go higher still as rescuers continued searching for victims, mostly in the upscale enclave of Montecito - where mudslides slammed into homes, covered highways and swept away vehicles - officials warned.

"We don't know how many additional people are still trapped," Santa Barbara County Sheriff Bill Brown said on the "CBS This Morning" program. "We know there are some, and we're still making our way into certain areas of Montecito and the adjacent areas to determine if anyone is still there and still alive."

The mudslides followed an ordeal of fire and water for the area northwest of Los Angeles. A torrential downpour on Tuesday soaked the area, which was left vulnerable after much of its vegetation burned in the state's largest wildfire last month.

Forecasters were calling for clear skies on Wednesday.

Emergency workers began their task on Tuesday using search dogs and helicopters to rescue dozens of people stranded in mud-coated rubble in the normally pristine area, sandwiched between the ocean and the sprawling Los Padres National Forest.

A 14-year-old girl was found alive on Tuesday after firefighters using rescue dogs heard cries for help from what was left of her Montecito home, the Los Angeles Times reported.

"I thought I was dead there for a minute," the teenager Lauren Cantin, covered in mud, told NBC News after workers spent six hours rescuing her.

Rescuers worked through the night, searching for victims amid the dozens of homes that were destroyed, and using helicopters to lift more than 50 stranded residents from the mud.

"We're finding people continuously," said Yaneris Muniz, spokeswoman for the Santa Barbara County Joint Information Center. "We had a helicopter and several crews out all night, and now that it's day, we'll be able to intensify those searches."

Officials have ordered residents in a large swath of Montecito to stay in their homes so that rescuers can better go about their work.

About 300 people were stranded in a canyon. Local rescue crews, using borrowed helicopters from the U.S. Coast Guard, worked to airlift them out, officials said.

The county initially ordered 7,000 residents to evacuate and urged another 23,000 to do so voluntarily, but only 10 to 15 percent complied with mandatory orders, said Amber Anderson, a spokeswoman for the Santa Barbara County Fire Department.

The county set up an evacuation shelter at Santa Barbara City College, where some people showed up drenched in mud, and also provided a place for people to take their animals.

The number of fatalities surpassed the death toll from a California mudslide on Jan. 10, 2005, when 10 people were killed as a hillside gave way in the town of La Conchita, less than 20 miles south of the latest disaster.

Last month's wildfires, the largest in California history, left the area vulnerable to mudslides. The fires burned away grass and shrubs that hold the soil in place and also baked a waxy layer into the earth that prevents water from sinking deeply into the ground.

Some local residents had to flee their homes due to the fires last month and again this week because of the rains.