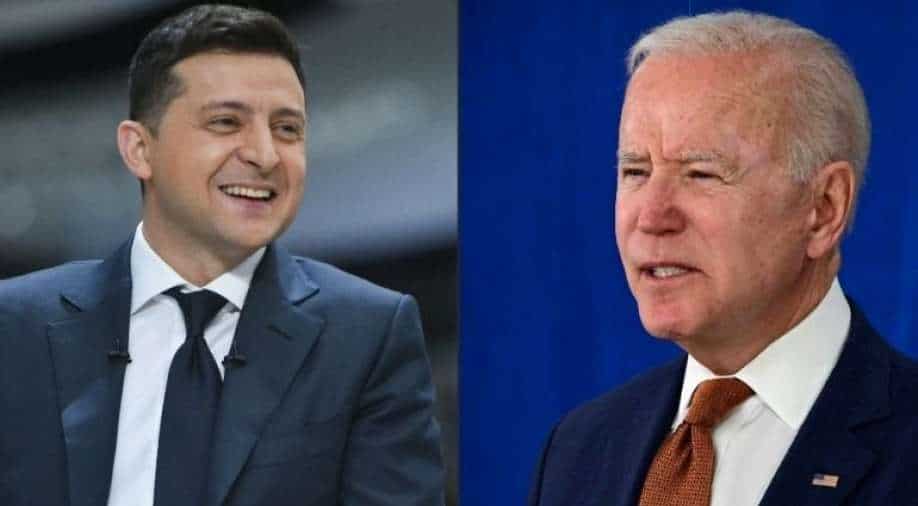 National security adviser Jake Sullivan said Biden extended the invitation during a phone call on Monday with Zelenskyy, who has publicly raised concerns about the US President's plan to meet with Russian leader Vladimir Putin and about a nearly completed Russia-to-Germany natural gas pipeline that would allow Russia to bypass Ukraine.

Biden made the invitation during a call that had been planned in advance of Biden's trip to Europe that culminates with a stop in Geneva next week for a face-to-face meeting with Putin as tensions in the US-Russia relationship remain high.

Zelenskyy tweeted his response: "Thank you @POTUS @JoeBiden for inviting me to visit the @WhiteHouse in July during our phone conversation. I look forward to this meeting to discuss ways to expand strategic cooperation between Ukraine and #USA."

Sullivan said Biden and Zelenskyy had the 'opportunity to talk at some length about all of the issues in the US-Ukraine relationship and President Biden was able to tell President Zelenskyy that he will stand up firmly for Ukraine's sovereignty, territorial integrity, and its aspirations as we go forward."

The Ukrainians also indicated that the Biden administration had committed to sharing 900,000 COVID-19 vaccines with Kyiv. Last week, the White House announced plans to share 80 million vaccine doses 'most through the United Nations-backed COVAX programme' by the end of June.

About 6 million in the initial distribution of 25 million were to be directed by the White House to US Allies and partners, including Mexico, Canada, South Korea, the West Bank and Gaza, India, Ukraine, Kosovo, Haiti, Georgia, Egypt, Jordan, Iraq, and Yemen, as well as to United Nations frontline workers.

"It will save the lives of many Ukrainians," Zelenskky said in a statement. The Biden administration disappointed Ukraine 'as well as many Democratic and Republican lawmakers in Washington' when it announced last month that it would not punish the German company overseeing the Russia-to-Germany pipeline known as Nord Stream 2, because it did not want to levy sanctions against an important European ally.

Russian gas currently flows through Ukraine en route to Europe, and Zelenskyy was hopeful that Biden would move to block the project that faced bipartisan opposition in Congress.

Zelenskyy reiterated his concerns about the pipeline during the call, according to the statement from his office.

Zelenskyy, in an interview with Axios published on Sunday, said he had urged Biden to join him 'at any moment and at any spot on the planet' before the planned Geneva meeting with Putin next week.

Ukraine has harbored hopes for increased military aid during the Biden administration and is looking for backing in its bid for NATO membership. Ukraine has long battled against Russia-backed separatists in the east and in the halls of government in Kyiv.

Crimea and large swaths of eastern Ukraine's Donbas region are under Russian occupation. Fighting in the region has claimed thousands of Ukrainian lives.

Russia launched a buildup of troops near the border earlier this year before announcing in April that it would pull back those forces.

The provocative move alarmed the US and other European allies. Zelenskyy, in the call, emphasised to Biden that there was still a high concentration of Russian troops and heavy weaponry there.

Zelenskyy found himself ensnared in former President Donald Trump's first impeachment, which centered around a 16-minute phone call in which Trump pressured the Ukrainian leader to investigate Biden and his son's dealings in the Eastern European nation in 2019.