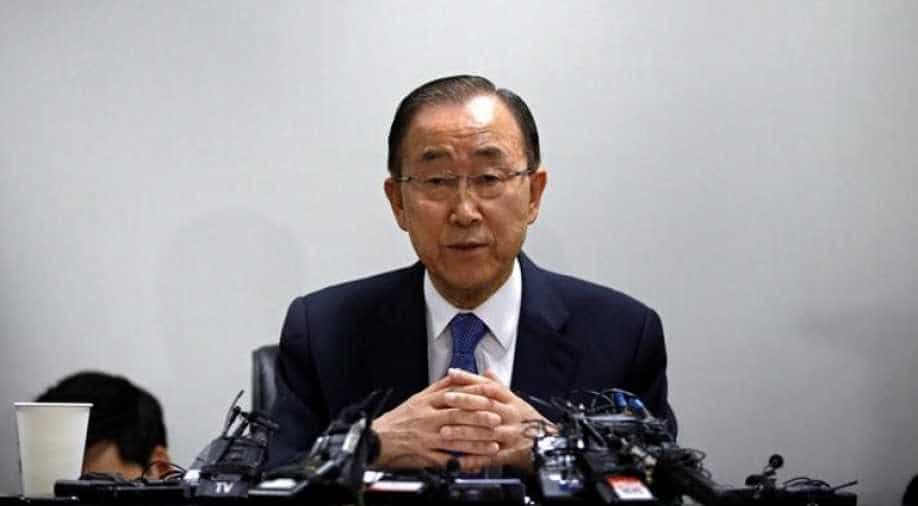 Ban Ki-moon complained of 'fake news' which had scarred his family and him. Photograph:( AFP )

Ban returned home last month after a decade in New York and was widely expected to run in elections due this year, but his putative candidacy ran into a series of stumbles and he struggled for backing.

"I will give up my pure intention to bring about a change in politics under my leadership and to unify the country," he told reporters at a hastily arranged press conference.

"I'm sorry for disappointing many people."

Although he never officially declared he was running, the former UN chief embarked on a series of public appearances and repeatedly spoke of the need to bring about a "change in politics" in a country where a wide-ranging corruption scandal has seen President Park Geun-Hye impeached.

Reports claimed he had signed a contract to rent a 660-square metre office in Seoul, and as recently as Tuesday he was urging a change to the constitution to dilute the sweeping executive powers of the presidency and ensure more co-operative governance.

The 72-year-old was widely expected to join Park's Saenuri party or an emerging conservative breakaway group for presidential elections which are due this year, whatever the outcome of the impeachment process.

But he struggled to secure party backing in South Korea's highly partisan political system, and corruption allegations were made against some of his relatives.

"I was very disappointed by the parochial, selfish attitudes of some politicians," he said Wednesday. "I reached a conclusion that it would be meaningless to move forward with them."

"In order to resolve our current problems, we need to abandon the self-conceited attitude of 'it must be me or no one else'," Ban added.

But he was also to some extent the author of his own misfortune, analysts said, not articulating a clear political platform and his prominent global role failing to translate into domestic support.

Pictures of him trying to put two banknotes into a ticket machine at once made him appear out of touch, and front-page photos of him wearing a bib to feed porridge to an old woman flat on her back in a care home sparked public fury.

He was criticised for wearing head-to-toe protective gear to try out a disinfectant spray at a farm, when most of those around him were not similarly dressed, and came under fire for becoming infuriated with reporters who asked questions about a controversial agreement between South Korea and Japan on wartime sex slaves.

"My pure patriotism and aspirations have fallen victim to slander that was close to personality slaughter," he said Wednesday, before bowing briefly, shuffling his papers and leaving the stage to a barrage of camera flashes.

His support in public opinion polls had rapidly declined from 20.3 percent when he returned to 13.1 per cent before his announcement.

"We cannot but deplore that he was discouraged by the selfishness of some politicians," it said in a statement.

Presidential race frontrunner Moon Jae-In, of the main opposition Democratic Party, said Ban's announcement was "unexpected considering his recent activities" but said he will seek his advice on diplomatic issues.

During his pre-UN career Ban never joined any South Korean political party, despite serving as foreign minister under the late liberal president Roh Moo-Hyun from 2004 to 2006.

Political scientist Park Kie-Duck, former head of the Sejong Institute, a prestigious independent think-tank, told AFP that Ban "failed to project an image as a leader with a vision and concrete political agenda".

"With no political machines to rely on, his fame as a former UN secretary-general has been wearing thin very quickly," he said.

"As a career diplomat, the country's rough and tumble political life was simply too much for him."