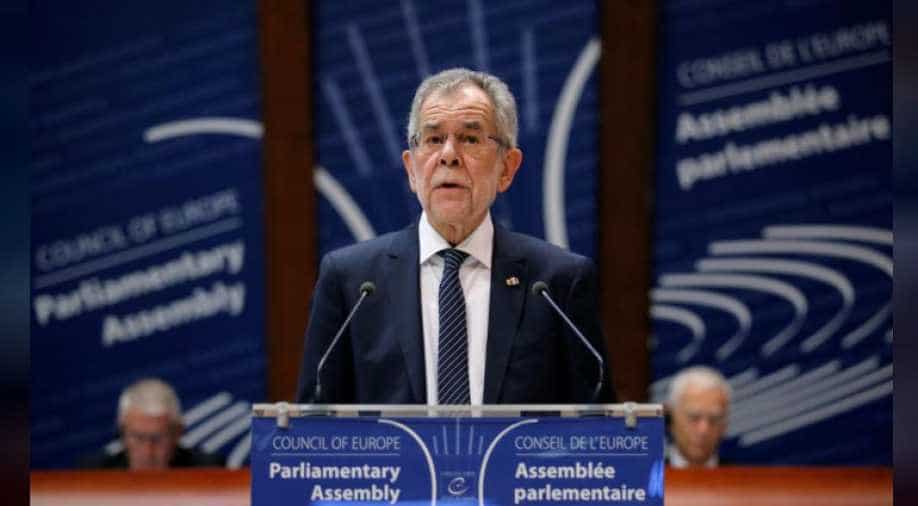 'My preference is for early elections in September, if possible the beginning of September,' he told journalists after holding talks with Chancellor Sebastian Kurz.

Austria's President Alexander Van der Bellen on Sunday called for fresh elections in September after a corruption scandal embroiling the far-right brought down the coalition government in spectacular fashion.

Conservative Chancellor Sebastian Kurz -- whose 18-month coalition with the far-right Freedom Party (FPOe) had been held up as a European model -- reacted by pulling the plug on their union.

"My preference is for early elections in September, if possible the beginning of September," Van der Bellen told journalists on Sunday after holding talks with Kurz.

The president will hold further talks with other party leaders over the coming weeks in order to fix a date.

The dramatic developments followed the publication by two German newspapers on Friday of footage from a sophisticated hidden-camera sting months before Austria's last parliamentary elections in 2017.

In the tapes -- of unknown provenance -- Strache is seen openly discussing the possibility of awarding public contracts in return for campaign help for the FPOe from a woman posing as the niece of a Russian oligarch.

The woman says she specifically wants to gain control of the country's largest-circulation tabloid, the Kronen Zeitung.

Strache is seen suggesting that new owners could make staff changes and use the paper to help his party in its election campaign.

"Enough is enough," the chancellor told a press conference in Vienna.

Strache for his part insisted in his emotional resignation statement that he had been the victim of a "targeted political attack" but also described his own actions as "stupid" and "irresponsible".

The FPOe was also due to meet on Sunday to confirm leadership changes after Strache's exit.

Neither Van der Bellen nor Kurz commented on who would replace the vice-chancellor in the run-up to elections and whether top FPOe politicians -- including controversial Interior Minister Herbert Kickl -- would be allowed to stay in post.

The damning revelations, which saw protesters take to the streets on Vienna on Saturday, broke as the campaign for European Parliament elections on May 23-26 was nearing its climax.

They risk dealing a blow to a far-right populist alliance marshalled by Italy's Interior Minister Matteo Salvini and in which the FPOe plays a key part.

The FPOe's lead MEP candidate Harald Vilimsky had been due to attend a rally organised by Salvini in Milan on Saturday, but cancelled the trip because of the scandal.

German Chancellor Angela Merkel reacted to the news out of Austria by warning of the dangers of far-right politicians "for sale", who wanted to "destroy the Europe of our values".

The tapes contained a litany of other embarrassing material for Strache, and analysts predicted setbacks for the FPOe from its current position in the polls.

As well as repeating unsubstantiated rumours about Kurz, Strache also hinted at ways political donations could escape legal scrutiny by going to a foundation linked to the FPOe.

Elsewhere in the recordings, he discussed the possible part-privatisation of public broadcaster ORF and expressed admiration for the media landscape in neighbouring Hungary, where press plurality has been severely curtailed under nationalist Prime Minister Viktor Orban.

Observers said the dramatic events of the past two days were almost a re-run of the last time that the centre-right People's Party (OeVP) and FPOe went into coalition, in 2000.

Then as now, after only two years the OeVP chancellor -- in that case Wolfgang Schuessel -- felt compelled to call snap elections due to strife with his FPOe coalition partner.

In 2002, the OeVP emerged strengthened from the elections but it remains to be see if Kurz, like Schuessel before him, can avoid damage from the fallout.