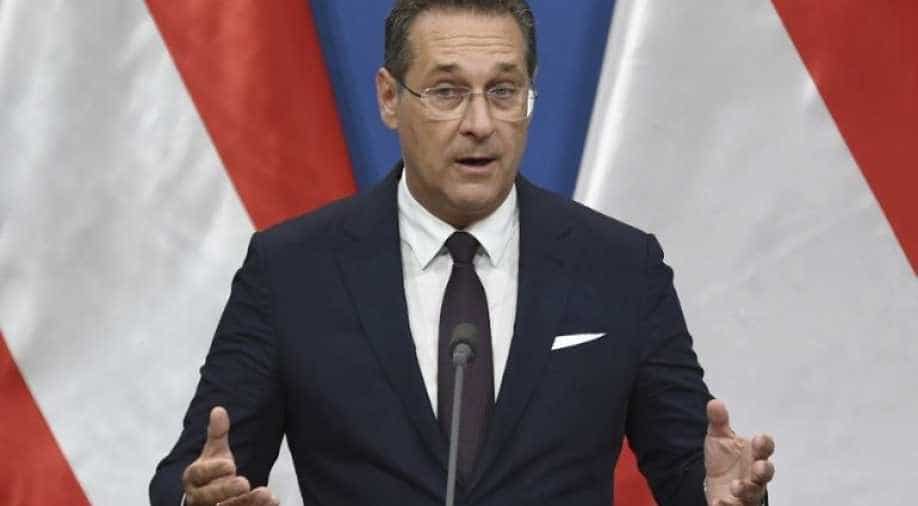 Austria's Vice-Chancellor and chairman of the Freedom Party FPOe Heinz-Christian Strache gives a press conference with Hungary's Prime Minister (not in picture) at the prime minister's office in Budapest. Photograph:( AFP )

Senior figures in the government - a coalition of Sebastian Kurz's conservatives and Strache's far-right Freedom Party - held a crisis meeting on Friday night.

Senior figures in the government - a coalition of Sebastian Kurz's conservatives and Strache's far-right Freedom Party - held a crisis meeting on Friday night.

Kurz, who has distanced himself from the far right to protect his image when lesser scandals have emerged, was due to make a statement later on Saturday. The opposition called for Strache to resign.

Even for a party used to controversy, this one appeared too big for it or the government to sit out.

"This is huge. This has to be the end of Heinz-Christian Strache," political analyst Thomas Hofer said, adding that it was unclear whether Strache's stepping down or a snap election was more likely.

The video was reported on Friday evening by two of neighbouring Germany's leading media - weekly Der Spiegel and newspaper Sueddeutsche Zeitung - purportedly showing a meeting in Ibiza between Strache, another party official and a woman purporting to be the niece of a Russian oligarch.

The newspaper reports also said the video appeared to be a sting operation.

The footage, recorded in July 2017 - months before the election that brought this government to power - showed Strache talking to the woman.

In it, he appeared to offer to direct inflated construction contracts to a company in exchange for support for his party, though he also said he wanted everything to be done legally.

Strache did not reply to a request for comment. Reuters was not able to verify the authenticity of the footage independently, and the German newspapers did not say how they obtained it.

Strache has headed the party since 2005, bringing it back to mainstream electoral success not seen since it was led by the charismatic Joerg Haider. It secured 26 per cent of the vote in 2017's parliamentary election.

The video is also a headache for Kurz, whose party is still leading in opinion polls but far short of a majority. The only other party with enough seats for a majority is the Social Democrats, with which Kurz, an immigration hard-liner, has difficult relations.

Neither Strache nor the FPO ever received or granted any benefits from the persons concerned, Hafenecker said in a statement.

"Since the video was obviously recorded illegally, we are also preparing appropriate legal steps."

"The FPO is finished," ran the headline in the tabloid Kronen Zeitung, which featured in the video since the woman said the oligarch wanted to buy a stake.

It remains unclear who was behind the recording.