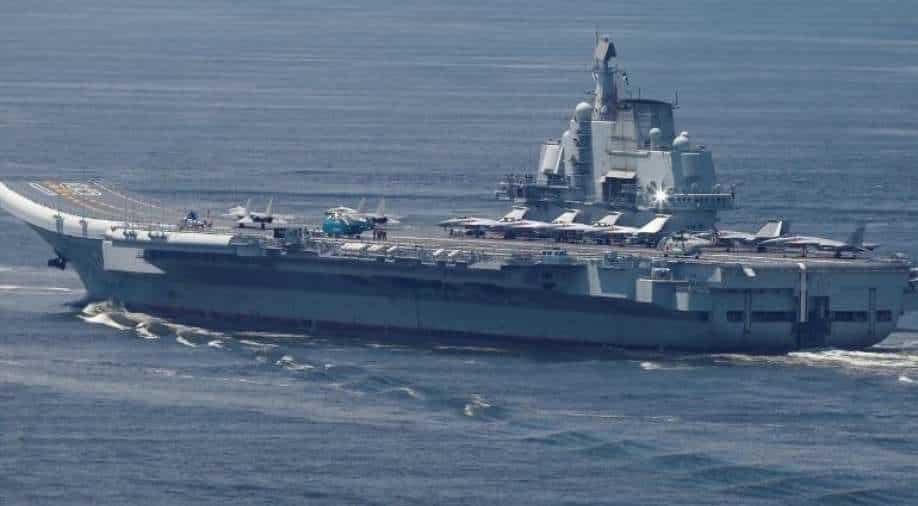 A Chinese carrier group is exercising near Taiwan and such drills will become regular, China's navy said late on Monday in a further escalation of tensions near the island that Beijing claims as its sovereign territory.

Taiwan government reported several aircraft breached the country’s air defence identification zone on April 5, one of which flew through the strategic Bashi Channel, south of the country.

Taiwan has complained of an increase in Chinese military activity near it in recent months, as China steps up efforts to assert its sovereignty over the democratically run island.

A Chinese carrier group is exercising near Taiwan and such drills will become regular, China's navy said late on Monday in a further escalation of tensions near the island that Beijing claims as its sovereign territory.

China's navy said the carrier group, lead by the Liaoning, the country's first aircraft carrier put into active service, was carrying out "routine" drills in the waters near Taiwan.

The aim is to "enhance its capability to safeguard national sovereignty, safety and development interests", it said.

"Similar exercises will be conducted regularly in the future," the navy added, without elaborating.

Taiwan's defence ministry said it had a "full grasp" of the situation in the air and at sea surrounding Taiwan and that it was "appropriately handling" the matter.

Japan's defence ministry said on Sunday that the Liaoning, accompanied by five escort ships, had transited the Miyako Strait on their way to the Pacific.

"The combination of aircraft carriers and Type 055 large destroyers will become a standard configuration of Chinese aircraft carrier task groups in the future," it added.

The Liaoning and its sister ship the Shandong have carried out drills or sailed near Taiwan before.

In December 2019, shortly before presidential and parliamentary elections in Taiwan, the Shandong sailed through the sensitive Taiwan Strait, a move condemned by Taiwan as attempted intimidation.

Taiwan is China's most sensitive territorial issue and a potential military flashpoint. China has never renounced the use of force to bring the island under its control.

Taiwan President Tsai Ing-wen is overseeing a revamp of the island's military, rolling out new equipment such as "carrier killer" stealth corvettes.

AstraZeneca finally delivers vaccines to EU which were due in January

An Italian woman received six doses of Pfizer Covid vaccine. What happened next?

Taiwan fights to attend WHO meeting as China denies entry