After 28 days undersea at 120 metres, researchers in France emerge in Marseille port 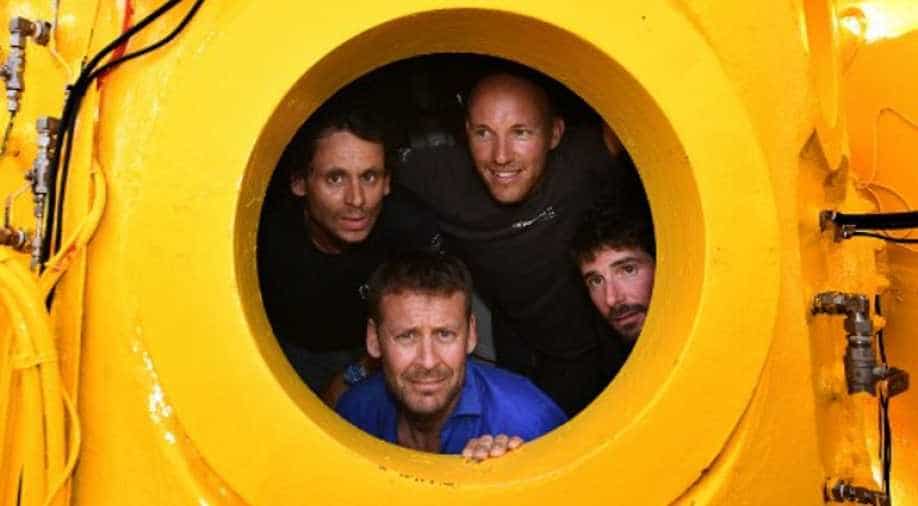 Ballesta has brought back film footage and thousands of images taken during his time in that inhospitable region: the weight of the water at that depth is 13 times that on the surface.

After 28 days below the sea at a crushing depth of 120 metres,  a team of four researchers emerged into the sunshine at the French Mediterranean port of Marseille on Sunday.

The team, led by marine naturalist and underwater photographer Laurent Ballesta, celebrated with family and friends Sunday evening after a three-day period spent in a decompression chamber.

This was not quite Jules Verne's "20,000 Leagues under the Sea" and the canary-yellow capsule in which they made their descent was not quite a submarine.

But the diving bell that was their home for four weeks allowed them to spend up to eight hours a day at 120 metres (395 feet) below the sea without having to worry about getting the bends when they resurfaced.

Ballesta described the marine wildlife and the "rock cathedrals of the underwater cliffs" that they had witnessed, as he and his colleagues celebrated the end of the expedition with champagne.

And reunited with his wife and two-month-old daughter, he admitted, tears in his eyes: "I underestimated the return to land. It's more moving than expected."

Ballesta has brought back film footage and thousands of images taken during his time in that inhospitable region: the weight of the water at that depth is 13 times that on the surface.

"We all live on the same planet, but there are several worlds, and we have had the honour of exploring another world," said Ballesta.

"At almost every dive, we were able to film or photograph a species that had never been observed living in its environment."

The other members of the team were marine biologist Antonin Guilbert, diving instructor and lighting specialist Thibault Rauby, and diver and cameraman Yannick Gentil.

Every day, the steel capsule, which measures one square metre, was lowered from a barge into the gloom of the "twilight" or mesophotic zone, where only one per cent of the sun's rays penetrate.

After each deep-sea dive, the divers returned to the chamber, in which the pressure was set at 13 times the pressure of the atmosphere.

When they were brought back to the surface at the end of every day, their capsule was connected to two other chambers -- one acting as a bathroom and the other as a kitchen with a small table and an airlock through which to receive food.

The research station was towed by barge along the coast between Marseille and Monaco over the course of the month, with their three-day stint at the end the only time they entered a decompression chamber.

During their four weeks underwater, the team also carried out experiments commissioned by researchers and laboratories and universities.

But the combination of the cold and the pressure made working so deep difficult and dangerous, said Ballesta. He and colleague Thibault Ribault were still suffering from frostbite on their fingers Sunday.

The Planet Mediterranean team stayed in regular contact with the outside world with video blogs and televised news conferences.

They are planning an exhibition of the photos taken during their expedition and also a documentary for release next year.