Islamabad: 6 dead, over 200 injured in clashes between Pakistan police, protesters 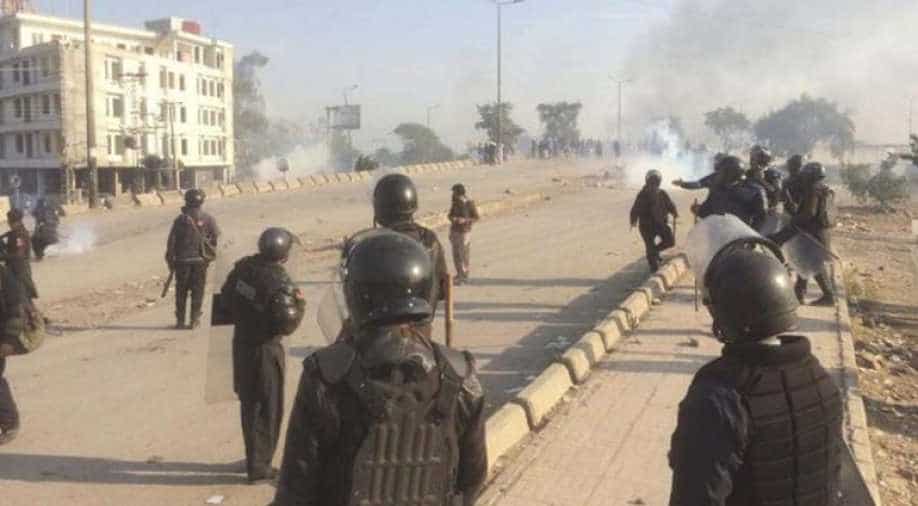 Police and paramilitary forces fired tear gas and rubber bullets at the protesters to disperse them. But they pulled back after the crackdown turned deadly. Photograph:( Zee News Network )

Pakistan's government has called in the army to restore order after clashes between police and protesters belonging to hardline religious groups killed six people and injured more than 200 others in the capital.

The police aided by paramilitary Rangers and Frontier Constabulary yesterday lunched a massive operation against activists of Tehreek-i-Khatm-i-Nabuwwat, Tehreek-i-Labaik Ya Rasool Allah and Sunni Tehreek Pakistan religious groups who had blocked a key highway to Islamabad for nearly three weeks.

Police and paramilitary forces fired tear gas and rubber bullets at the protesters to disperse them. However, the security forces pulled back after the crackdown turned deadly.

The protesters have been laying siege to the Pakistani capital of Islamabad for about three weeks demanding the removal of Law Minister Zahid Hamid, whom they accuse of blasphemy

At least six people were killed in clashes yesterday, Dawn reported. It also said that no security personnel was killed but at least nine senior police officers were injured including Rawalpindi city police chief Israr Abbasi.

According to health officials, more than 200 people, including at least 95 security personnel, were injured in the clashes and shifted to various hospitals.

The Interior Ministry last night issued a statutory regulatory order to authorize the deployment of the army to control the law and order situation in the capital.

Official sources said Prime Minister Shahid Khaqan Abbasi and Chief of Army Staff General Qamar Javed Bajwa are expected to hold a meeting to discuss the situation after the government sought deployment of the army in the capital.

However, the army said it needed clarification on some points before moving in to control the situation.

General Bajwa was on a visit to the United Arab Emirates and cut short his trip to reach the country last night.

Earlier, he spoke to Abbasi over telephone and suggested to handle the protests peacefully "avoiding violence from both sides as it is not in national interest and cohesion."

Meanwhile, all news channels have been off-air and access to popular social media blocked since yesterday.

The protesters have been laying siege to the capital for about three weeks demanding removal of Law Minister Zahid Hamid for changes in a law related to the Khatm-i-Nabuwwat (finality of prohpethood) oath in the Elections Act 2017.

They alleged the action undermined Islamic beliefs and linked it to blasphemy. The government has already amended the law and restored the original oath but the hardline clerics refused to call of the protests until the minister is sacked.

The unrest also spread to several cities where protesters have blocked major roads, resulting in clashes with police. Dozens of people were injured in Karachi and at other places.

Minister of Interior Ahsan Iqbal chaired a high-level security meeting on Friday night but failed to reach at any decision about further operation as senior officials of Islamabad administration and police warned to loss of human lives, according to sources in the interior ministry.

The protesters emboldened by failure of government upped the ante and demanded resignation of the government, according to report on Geo TV website.

There are reports that ruling Pakistan Muslims Leauge- Nawaz was discussing the option of removing law minister to pacify the protests. But it may be too late now. The minister is already under immense pressure after an attack yesterday at his residence in Pasroor area of Sialkot district in Punjab.

Opposition Tehreek-e-Insaf have also increased pressure on government and its secretary general Jehangir Tareen demanded resignation of interior minister for mishandling the operation.