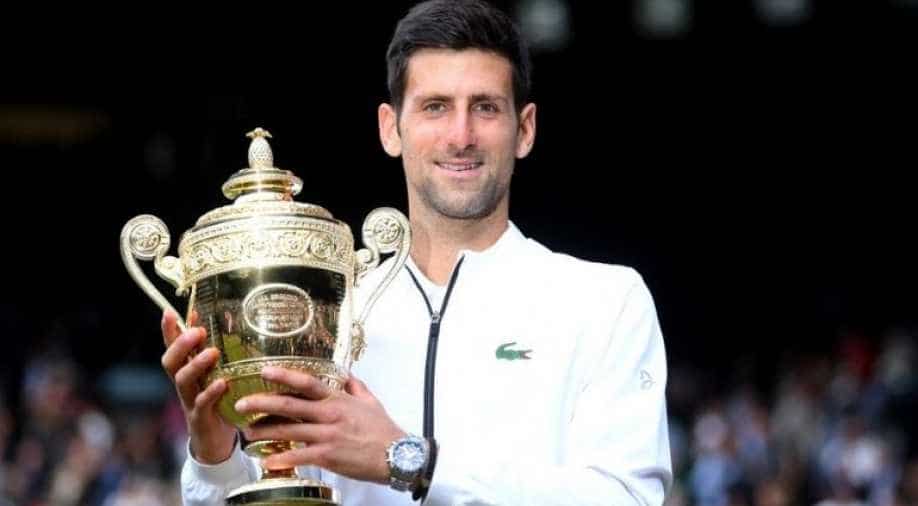 'When the crowd is chanting 'Roger' I hear 'Novak',' said Novak

Novak Djokovic admitted his epic, record-breaking Wimbledon final triumph over Roger Federer on Sunday was the "toughest mentally" he had ever endured.

He also revealed he was able to turn the overwhelmingly pro-Federer, 14,000-strong Centre Court crowd in his favour by training his mind.

"When the crowd is chanting 'Roger' I hear 'Novak'," said the Serb.

The world number one saved two match points to clinch a fifth Wimbledon title and 16th major, shattering Federer's bid to become the oldest Grand Slam champion in the longest final ever played at the tournament.

At 4 hours and 57 minutes, it was the longest Wimbledon final ever played and settled by a final set tiebreak for the first time.

Djokovic is the first man in 71 years to win the title from match points down.

"It was probably the most demanding, mentally, match I was ever part of," said the 32-year-old Djokovic.

"I had the most physically demanding match against (Rafael) Nadal in the final of Australia that went almost six hours (in 2012).

"But mentally this was a different level, because of everything."

"I'm thrilled and overjoyed with emotions to be sitting here in front of you as a winner but I was one shot away from losing the match. It could have gone easily his way."

Djokovic saved the match points in the 16th game of the deciding set, which ran for over two hours and was settled by a 12-12 tiebreak for the first time in a singles match at the tournament.

It was a display of stunning mental fortitude by Djokovic.

However, he has been in similar predicaments in the past against Federer -- saving two match points in both of his semi-final victories over the Swiss at the 2010 and 2011 US Opens.

"I just try to never lose self-belief, just stay calm, just focus on trying to get the ball back, return, which wasn't serving me very well today.

"But in the most important moments, all three tiebreaks I guess, if I can say so, I found my best game."

Djokovic also insisted he had pictured how the final would play out, appreciating that Federer was, as always, the sentimental favourite.

"I like to transmutate it in a way: When the crowd is chanting 'Roger' I hear 'Novak'. It sounds silly, but it is like that. I try to convince myself that it's like that," he said.

Djokovic is now just two Slams behind Rafael Nadal and four back from Federer on the all-time list.

He is also younger than both of his great rivals.

But on Sunday, he was off the pace for large parts of the final, only carving out his first break points in the eighth game of the fourth set.

"I thought I could have played better. But the one thing that probably allowed me to come back and save match points and win this match was the mental stability in those moments," admitted the champion.

"I guess that all of these things combined in a courageous effort.

"You have to keep reminding yourself that you're there for a reason and that you are better than the other guy."