Modric: Messi leaving would be a huge blow to La Liga's prestige 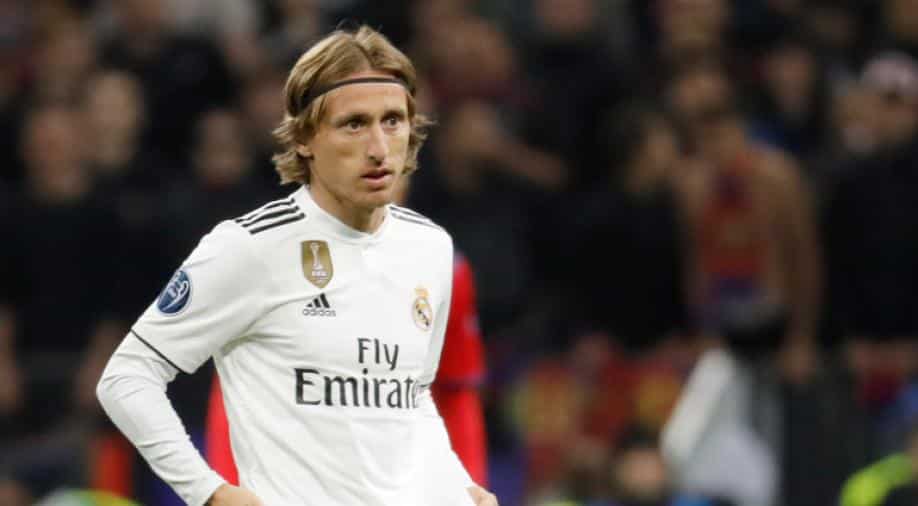 Luka Modric blows out his cheeks. "It would be a huge loss," he says. "Like when Cristiano left. But you can't think about the past. It's football and that's it."

Luka Modric blows out his cheeks. "It would be a huge loss," he says. "Like when Cristiano left. But you can't think about the past. It's football and that's it."

Modric has faced Lionel Messi 21 times and is the only player since 2008 other than Cristiano Ronaldo to beat him to the Ballon d'Or. He knows what it would mean if he leaves.

"If it happens it will be a huge loss for the prestige of the league," he tells AFP. "But we need to go forward. Other players will become stars.

"When Ronaldo left, the same thing happened, the life of Real Madrid went on without him and it will be the same for Barcelona and La Liga without Messi."

After Ronaldo, Real Madrid needed two sacked coaches and the return of the old one to get back on their feet, a recovery still not complete as shown by a second consecutive exit in the Champions League last 16.

Messi's departure, even his unhappiness, would give Madrid an opening, not only to win La Liga again but to establish their own period of supremacy in Spain.

The first step is defending the title they won in July.

"We don't have a young team but we have an experienced team," says Modric. "We have young players, who will get better. I don't know if we will buy players but even if it stays like this, we have enough quality.

"We showed it in La Liga and we know we can do it again. After the suspension, we came back so motivated. We missed football, we missed winning games.

"We had worked so hard, I think physically we were the best team in the league and that's why we won it. It was my second La Liga title and I want to win more."

Modric was arguably Real Madrid's best player during the 11-game run-in, perhaps benefitting more than anyone from the three-month pause, after a period when he found himself rotated.

"I had two injuries that set me back and then other players took their opportunity," Modric says. "It wasn't easy for me, but maybe now Zizou sees it differently because I never gave up and in the end I was playing again. I feel well now, I feel fit, I feel motivated."

He turns 35 next week but Modric still feels instrumental to this Real Madrid, his calm masking an inner-steel that is well-suited to Zidane and perhaps symbolic of the team as a whole.

In his autobiography, 'My Game', released last month, Modric said Zidane urged him to be more of a leader and he has been supporting Eden Hazard during the Belgian's injury-ravaged opening year.

"Eden is a great guy and a special player," says Modric. "But he was playing with pain and when you're on the pitch, people always expect the best. They don't care if you have little problems.

"I spoke to him and said, 'Eden maybe you need not to play now and recover because next season we need you at your best. This is a season where you're getting to know everything but next season you need to be 100 per cent because if not, it's going to be difficult'.

"Hopefully he comes back without any problems and then I'm sure he'll show his potential and why the club bought him because we will need him a lot."

Hazard retains the confidence of Zidane but the same cannot be said for Gareth Bale, whose prospects look bleaker than ever if he stays.

Modric has spent 12 years playing with Bale, four at Tottenham and eight with Madrid, and he is one of those closest to the Welshman in the dressing room.

"Gareth is a great, great player," Modric says. "But his situation is not easy. He always has my support but he needs to decide what is best for him and what he wants to do now with his career.

"It was not an easy season for him but it is what it is. Maybe now he needs to get back to his best. Maybe to fight or... We'll see what happens with him."

Unlike Bale, Modric trusts Zidane absolutely, dismissing those who claim he is a motivator graced with good luck.

"He just perfectly understands players," Modric says. "He is one of the best coaches, definitely.

"What we have achieved is unimaginable and still people say it's because of luck or this or that, and they don't give him the recognition he deserves -- but he doesn't need it. His results speak for themselves."

Modric recalls one of his first meetings with Zidane in 2016, which he cites as a turning point in his career.

"I remember it word for word," says Modric. "He said, 'I see you as a player who can one day win the Ballon d'Or'. I'd never even thought about the Ballon d'Or before but when someone like Zizou tells you that, you feel so much confidence.

"It's why we've always had such a great relationship and I hope he stays at Madrid for a long, long time."

Luka Modric's autobiography, 'My Game', was released on August 20 in the UK, France and Spain.