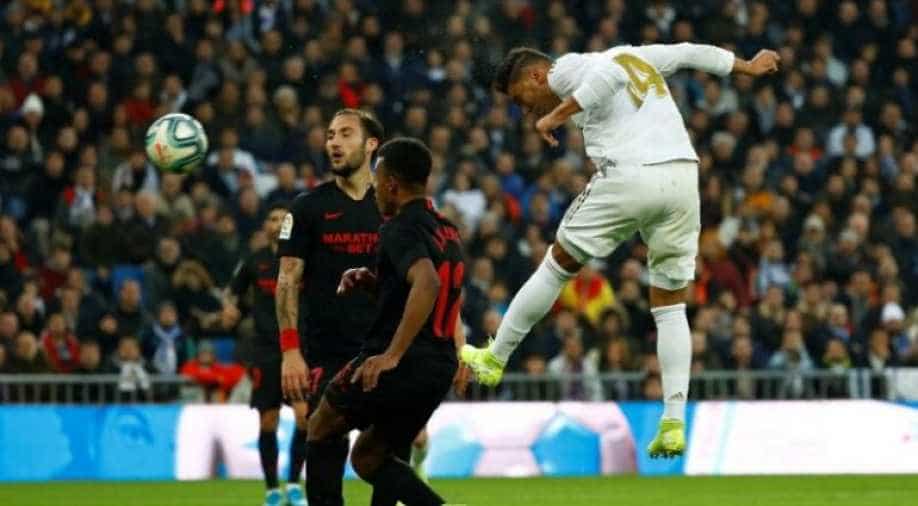 Casemiro dragged Real back in front moments later with a towering header, taking his side first in the standings.

Real Madrid midfielder Casemiro produced a performance worthy of a top striker by scoring twice in a 2-1 win for Zinedine Zidane's side over Sevilla on Saturday that took them top of La Liga for at least 24 hours.

Sevilla, however, were left fuming by the decision to rule out a first-half header from Luuk de Jong from a corner after a VAR review of a challenge by midfielder Nemanja Gudelj on Real defender Eder Militao.

Brazilian Casemiro, initially deployed as a holding midfielder, broke the deadlock in the 57th minute with an ice-cool dinked finish after a back-heel from Serbian forward Luka Jovic released him in the area.

Sevilla levelled in the 64th with a curled effort from Dutch striker De Jong which was allowed to stand even though the ball had bounced off the elbow of forward Munir El Haddadi in the build-up.

Casemiro dragged Real back in front moments later with a towering header, taking his side first in the standings on 43 points after 20 games, three ahead of champions Barcelona who host Granada on Sunday.

Real Madrid take the top spot in #LaLigaSantander after their win at the Bernabeu. 🔝💜 pic.twitter.com/WQT3RbXqWe

Sevilla's sporting director Monchi was furious with the decision to rule out the first goal for the tangle between Gudelj and Militao.

"It's the type of thing you see all the time, and I refuse to analyse the game after that because that moment was key and it's absurd to try and give any analysis after a goal like that was ruled out," he told reporters.

"If they had ruled out our other goal, I would have gone down to the pitch and ordered my players to leave."

Sevilla coach Julen Lopetegui added: "I cannot understand how they could rule out that goal, there is no reason at all."