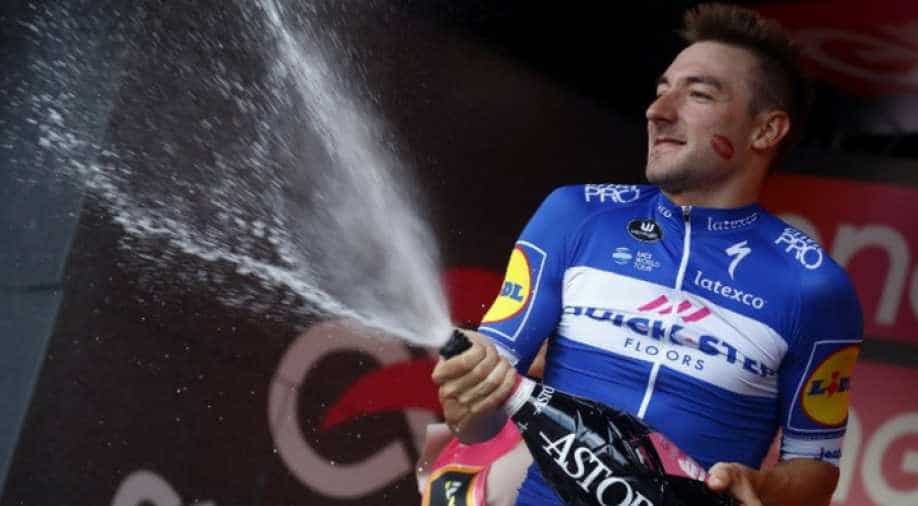 Italy's Elia Viviani of the Quick Step team dominated a sprint finish for the Giro d'Italia 13th stage on Friday, his third success in this year's race.

Britain's Simon Yates (Mitchelton) holds the leader's pink jersey on the eve of a gruelling mountain stage to the summit of Monte Zoncolan.

The 29-year-old Viviani had struggled on Thursday but hit back for his fourth stage success in total after back-to-back successes in Tel Aviv and Eilat in Israel.

"It's amazing to be back after a few difficult days," said Viviani.  "This is what I needed and what my team deserved for the great job they have done.

"I had two or three bad days but I was still determined to keep the Maglia Ciclamino (points jersey)."

Covering flat roads of the eastern Po Valley, the 180km stage from Ferrara to Nervesa della Battaglia was tailor-made for the fast men of the peloton.

Vivani produced a late burst of acceleration in the dying metres to finish well ahead Ireland's Sam Bennett, the winner of the two other group sprints.

Dutch rider Danny Van Poppel took third ahead of Italy's Sacha Modolo as the race finished at Nervesa della Battaglia to commemorate the centenary of a battle which was among the most significant fights in the First World War.

"Until the latest possible moment&nbspI tried to stay safe," said Yates.  "The big guys in the team did a great job just keeping me at the front. It's been the easiest day we've had so far. I'm looking forward to tomorrow."

Saturday's 14th stage leaves San Vito al Tagliamento and finishes on the summit of Monte Zoncolan in the Carnic Alps after 186 km of racing which includes four climbs before the final 10.5km ascent, reputedly one of the toughest in Europe.