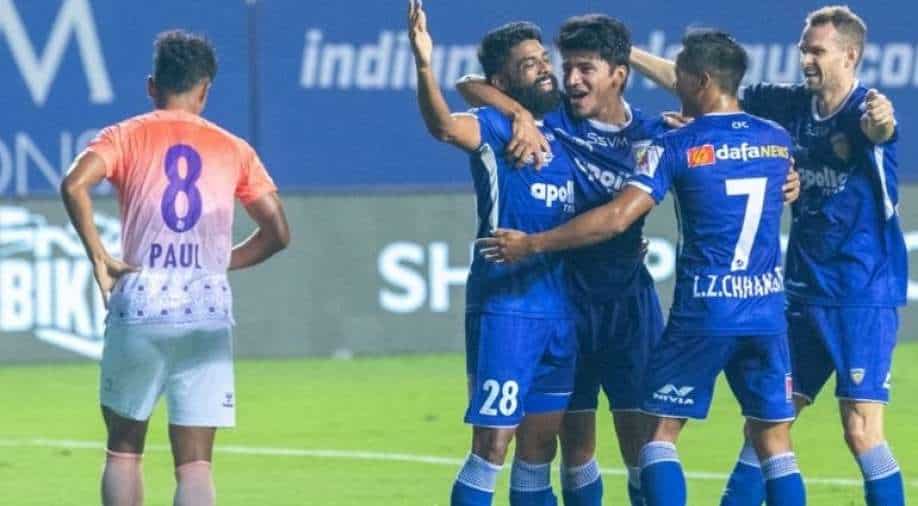 Former champions Chennaiyin FC returned to winning ways with a 2-1 win over Odisha FC in the Indian Super League at the Tilak Maidan Stadium on Saturday.

Germanpreet Singh opened the scoring with his first-ever goal in the ISL. Mirlan Murzaev made it 2-0 in the second half with a brilliant strike from distance as the Bozidar Bandovic-coached side moved to third in the points table, level on points with second-placed Jamshedpur FC and four off league leaders Mumbai City FC.

Odisha succumbed to their second straight defeat and dropped a rung to fifth place with nine points from six matches. Chennaiyin have 11 points from six games. Javi Hernandez scored a superb goal but it wasn't enough in the end.

Both teams looked to suss each other out in the opening exchanges and it was a cagey affair before Chennaiyin nosed ahead riding an unlikely source.

Germanpreet scored a goal after six years when he smashed home a rebound after Odisha keeper Kamaljit Singh blocked a cross from the right flank which fell to Germanpreet.

It was the first goal for the 25-year old since 2015 when he had netted for Dempo against Royal Wahingdoh.

Despite being 1-0 down, Odisha continued to give Chennaiyin a tough time but failed to find the back of the net, also adding teeth upfront.

It was end to end stuff from the start of the second period. Lallianzuala Chhangte got a golden opportunity to double Chennaiyin's lead when he was one-on-one with Kamaljit was narrowed the angle and smothered Chhangte's effort.

Five minutes later, Aridai Suarez fired a ferocious long-ranger which cannoned off the post and went out for a goalkick. Aridai came close again but his attempt flew over the bar.

At the other end, Chennaiyin doubled their advantage courtesy of a scintillating solo effort from Murzaev.

The 31-year old Kyrgyzstan footballer was unmarked and made the most of it with a long-range shot that arrowed past a diving Kamaljit and thudded into the back of the net.

It could have been 3-0 for Chennaiyin after Vladimir Koman was hacked down inside the box, but Lukasz Gikiewicz saw his effort saved by Kamaljit.

Javi Hernandez scored a stunner in added time for Odisha but it was too little too late and Chennaiyin bagged the all-important three points.