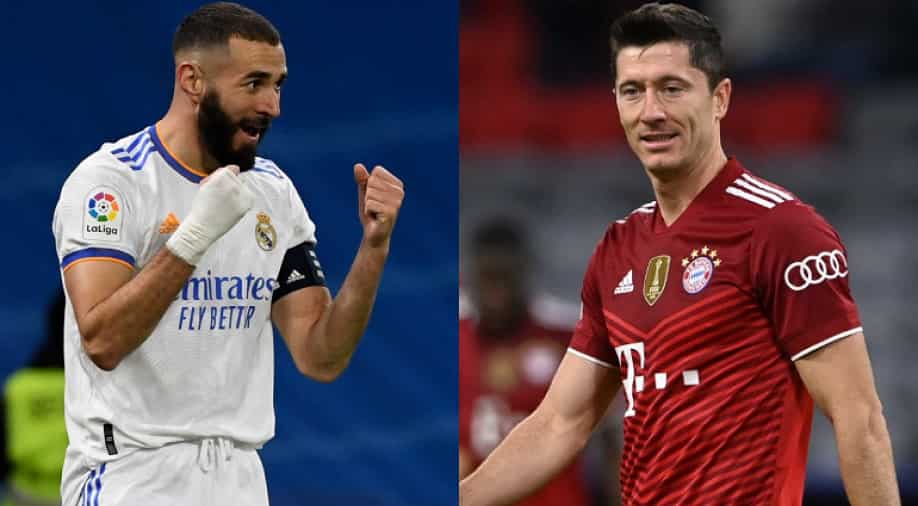 A look at the top 5 goal-scorers in club competitions across top 5 leagues in the world. Photograph:( AFP )

Bayern Munch striker Robert Lewandowski is currently the top goal-scorer in 2021 across the top five leagues and other major club competitions. Here is a look at the top five goal-scorers of the year so far.

Robert Lewandowski might have missed out on the 2021 Ballon d'Or, finishing second behind the legendary Lionel Messi but he has had a fabulous 2021. The Bayern Munich striker has continued his goal-scoring exploits last season in the ongoing season and has been unstoppable for the Bundesliga leaders.

Lewandowski is on the top of the goal-scoring charts in the year 2021 in club football as far as top five leagues and major European competitions - Champions League, and Europa League are concerned. The Polish star scored his 69th goal across all competitions for club and country in 2021 to match Cristiano Ronaldo's record of 69 goals in a calendar year.

Lionel Messi still tops the elite list with a stunning 91 goals to his name in a calendar year in 2012. While Lewandowski is the top goal-scorer of 2021 across all competitions for club and country, he also leads the goal-scoring charts when taking into account the top five football leagues in the world and other major club competitions, including the Champions League and the UEFA league.

The Bayern Munich striker has been unstoppable this season as he continues to shatter records with his goal-scoring exploits. The Polish star, who finished second in the Ballon d'Or 2021 awards, has scored 56 goals in 45 appearances across major club competitions this year. He averages a brilliant 68 minutes per goal and has been instrumental in keeping Bayern on top of the Bundesliga table.

Erling Haaland is taking the Bundesliga by a storm and seems ready for a switch to a big club next season. Haaland has been exceptional for Borussia Dortmund with 43 goals in 42 matches for the Bundesliga giants. Haaland has become one of the most sought-after youngsters in the league and it remains to be seen where he will head to after his Dortmund contract ends next year.

The French striker had proved his goal-scoring pedigree in the 2018 FIFA World Cup where he helped France lift the title with a campaign to remember. A quality striker and one of the most talented youngsters in world football, Mbappe has achieved a lot in a short career so far. He continued to tear it in the Ligue 1, Champions League and other competitions this season for PSG with a whopping 41 goals in 52 matches. He is the third-highest goal-scorer of the year as far as the top five football leagues are concerned.

The Liverpool winger often doesn't get the credit for his consistency. He has been a force to reckon with ever since joining Liverpool and has been scoring goals one season after another. Salah continued his heroics in the year 2021 with 37 goals in 51 appearances for the Premier League giants. Despite being one of the best players in the Premier League over the last few years, Salah could only finish seventh in the Ballon d'Or rankings this year.

Real Madrid striker Karim Benzema continues to shine at the Bernabeu and has almost single-handedly shouldered the goal-scoring responsibilities ever since Cristiano Ronaldo's departure from the club in 2018. Benzema notched up 36 goals in 33 appearances for Real Madrid across all competitions in 2021 and is currently fifth on the list pf the top goal-scorers of the year.