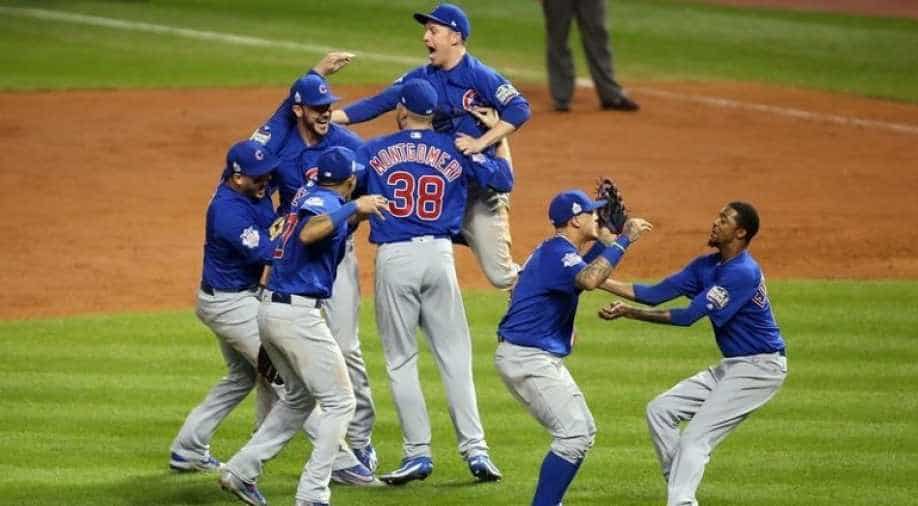 It was the third World Series crown for the Cubs, while the disconsolate Indians replaced them as the team with the longest current World Series title drought, 68 years and counting. Photograph:( Reuters )

The Chicago Cubs shed themselves of the "Curse of the Billy Goat" and ended a 108-year wait for a world series title by beating the Cleveland Indians on Wednesday in a dramatic fashion.

The Cubbies captured their first world series since 1908 defeating the host Indians 8-7 in the 10 inning thriller, ending the longest sports title drought in American history.

But the historic victory came only after Chicago squandered a four-run lead and looked ready several times for another heartbreaking stumble. "This trumps everything. I am so happy," Cubs slugger Kris Bryant said. "That's one of the best games anyone will ever see."

Also known as lovable losers, the Cubs became the first team since 1985 to rally from a 3-1 Series deficit to win the Game Seven classic.

The Cubs led 6-3 and were four outs from victory when ace closing reliever Aroldis Chapman surrendered a run-scoring double to Guyer and a two-run homer to Davis that equalized at 6-6. "We never quit," Cubs manager Joe Maddon said. "Everything was going perfectly until Davis hit that home run. Then we had to go to plan B, C, D."

Ben Zobrist doubled in the go-ahead run in the 10th inning and Miguel Montero added a bases-loaded single for an 8-6 Cubs lead after teams endured a 17-minute rain delay following a 6-6 deadlock in regulation play.

"It's unbelievable," said Zobrist, who was named the Most Valuable Player. "Most teams would have folded after we lost that lead. "I can't believe after 108 years we're able to hoist the trophy."

The win set off a wild celebration in the streets of the Windy City after over a century of pent up frustration for fans since their last Major League Baseball championship in 1908.