Barcelona through to last 16 of Champions League despite Icardi equaliser 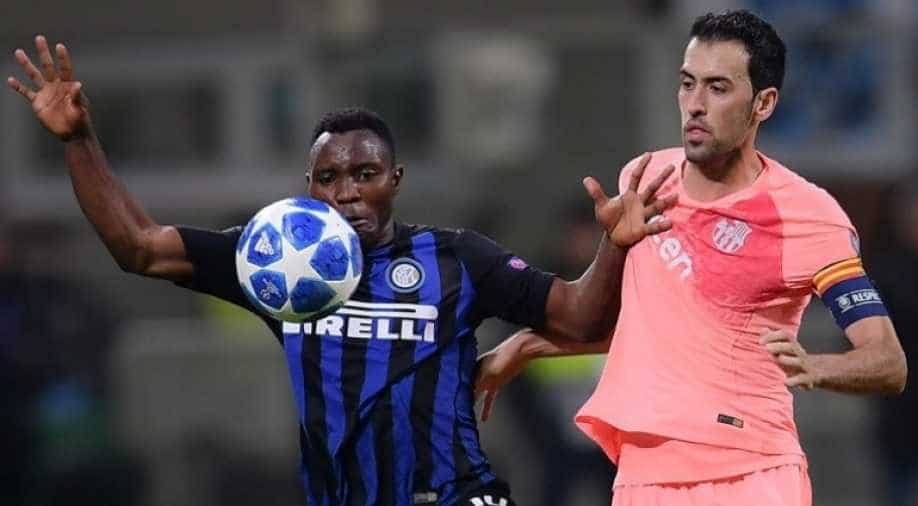 Ice cold Icardi struck with his first shot of the match in the 87th minute to grab a draw from a match Barcelona dominated from the start.

Barcelona qualified for the knockout stage of the Champions League despite Mauro Icardi snatching a late 1-1 draw for Inter Milan at the San Siro on Tuesday.

Ice cold Icardi struck with his first shot of the match in the 87th minute to grab a draw from a match Barcelona dominated from the start, just four minutes after a neat curling strike from substitute Malcom gave the away side a fully deserved lead.

"We played the best team in the world and they scored a typical Barcelona goal, but we never gave up, we kept fighting," Icardi told Sky Sport Italia.

"We didn't give up after they scored and fortunately the ball bounced to me... There was a bit of luck that the ball arrived there."

The Argentine pounced in a goalmouth scramble, spinning and firing home from close range, and rewarding a brilliant performance from keeper Samir Handanovic that kept Inter in a game they in which they struggled to get a foothold.

"We could not clear a silly ball inside the area and we paid for it," said Barca midfielder Sergio Busquets.

"I think we have deserved more. We were more ambitious and we dominated the whole game."

Barca, without injured Lionel Messi, were left to lament throwing away three points from a game in which they created more than enough chances to win but couldn't get past the superb Slovenia international in the Inter goal.

"I think Barcelona played far better than us and we could've done more. They came forward too easily in the first half and when you leave them possession constantly, you are going to be pinned back," said Handanovic.

Barca were on the front foot from kick-off and Ousmane Dembele forced Handanovic into the first of a series of fine saves with a sharp curling strike just a minute into the game.

That dominance continued throughout the almost the entire match as Barca had almost complete command of the ball and goalscoring chances, Inter's best opportunity before Icardi's leveller coming in the 19th minute when Kwadwo Asamoah flashed over Ivan Perisic's low cross.

Inter struggled to string passes together under the weight of Barca's pressing, and Handanovic had to be at his best to stop fine efforts from Luis Suarez and former Inter player Philippe Coutinho putting the away side ahead before the break.

The Slovenia international made his best save just before the hour mark when he charged out to block Ivan Rakitic's shot as the Croatian bore down on goal.

He was eventually beaten just as it looked like he was going to save Inter from conceding so many chances, Malcom scampering down the right in the 83rd minute before ripping home a shot between two Inter players.

But his saves kept the hosts in the game right until the end, and Icardi took the one chance he had to save a point.

"We just switched off a bit in the final moments," said Barca coach Ernesto Valverde. "We know that Inter have picked up a lot of points in the last minutes.
"But we're happy because our main goal of qualifying is achieved. The one that's left is for us to get first place."