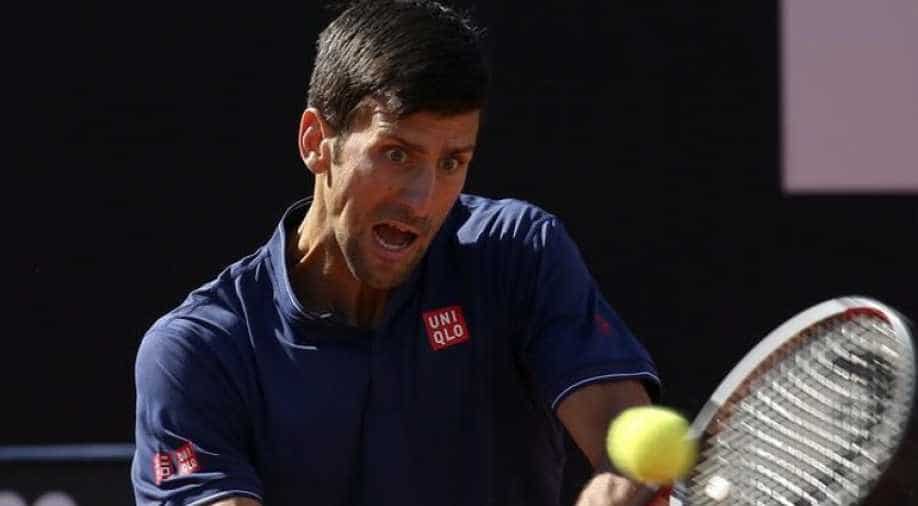 Given his performances of late, he will be hoping 47-year-old Agassi, an eight-time Grand Slam champion can make a positive contribution. Photograph:( Reuters )

Novak Djokovic revealed on Sunday that American great Andre Agassi would be his new coach, but said they did not yet have a "long-term commitment".

"I spoke to Andre the last couple weeks on the phone, and we decided to get together in Paris. So he`s gonna be there. We`ll see what future brings. We are both excited to work together and see where it takes us," said Djokovic, beaten 6-4, 6-3 in the Rome Masters final on Sunday by 20-year-old German Alexander Zverev.

"We don`t have any long-term commitment. It`s just us trying to get to know each other in Paris a little bit."

Djokovic returns to Paris next weekend as the defending French Open champion but looking to improve his clay court game after an inconsistent spell.

He parted with long-time coach Marian Vajda earlier this month, having also ended a three-year relationship with six-time Grand Slam champion Boris Becker at the end of last season, in a bid to get back to his brilliant best.

Given his performances of late, he will be hoping 47-year-old Agassi, an eight-time Grand Slam champion can make a positive contribution.

The Serbian was outplayed by Spanish nemesis Rafael Nadal on his way to defeat in the semi-finals of the Madrid Masters last week.

And despite reaching the final in Rome on Sunday, Djokovic looked well below his clinical best before losing to German starlet Zverev in 1hr 21min.

Next up is his defence of his title in the French capital, and Djokovic added: "He (Agassi) will not stay the whole tournament. He`s gonna stay only to a certain time, and then we`ll see after that what`s gonna happen. Obviously, Andre is someone that I have tremendous respect for as a person and as a player. He has been through everything that I`m going through. You know, on the court he understands the game amazingly well. I am enjoying every conversation that I have with him. But also, on the other hand, he`s someone that nurtures the family values, philanthropy work. He`s a very humble man, is very educated in just -- you know, he`s a person that can contribute to my life on and off the court a lot. I`m very excited to see what is ahead of us."

Agassi, unlike television pundit Becker, has been away from the sport for a considerable time having retired in 2006.

Djokovic said he managed to seduce Agassi, the 1999 French Open champion, smiling: "I persuaded him."

He added: "He`s someone that has been so successful in this sport, and he`s a legend of our sport. He`s made a mark in this sport forever. He`s won everything there is to win in tennis.

"You know, he was a revolutionary player because he had this charisma, he had this, you know, approach to tennis and to life that was quite different from others.

"That`s why he was so interesting. Yes, he has been away from the tour for last 10, 15 years, but speaking with him, he`s been definitely following up closely all the matches, the big matches, especially on the TV."

"It was his call whether or not he wants to take that step and, you know, try to work with me. He has accepted it, and I`m very grateful for that. It`s exciting, of course. I`m very happy about it."