Myanmar to repatriate remains of suspected WWII US airmen 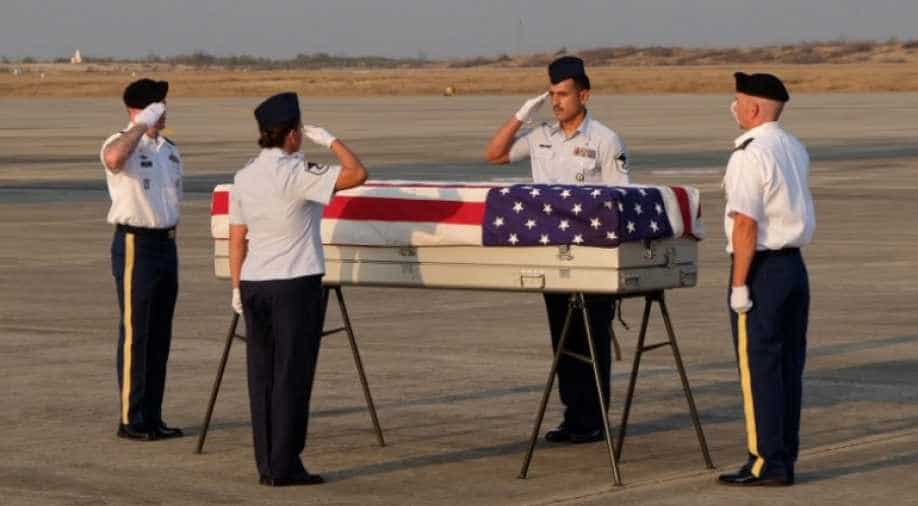 US military honour guards salute over the flag draped coffin bearing the recovered remains of suspected American airmen during a repatriation ceremony at the Mandalay International Airport. Photograph:( AFP )

The remains of hundreds of American military personnel are still unaccounted for in Myanmar, a key conflict arena in Asia between the Allies and Japan during World War II.

The remains of suspected American airmen killed in Myanmar during World War II will be repatriated to the United States on Tuesday in the first-ever ceremony of its kind in the Southeast Asian nation, US officials said.

The remains of hundreds of American military personnel are still unaccounted for in Myanmar, a key conflict arena in Asia between the Allies and Japan during World War II.

The remains to be repatriated on Tuesday are believed to be linked to a crashed B-25G aircraft in February 1944 in the Salingyi area of the northwest Sagaing region.

The wreckage was found in an investigation two years later but the graves could not be located.

A ceremony was to be held at Mandalay International Airport on Tuesday to honour the servicemen.

"Today, we repatriate the possible remains of what may be US citizens who died in service to our nation more than 75 years ago," US Ambassador to Myanmar Scot Marciel said in a statement.

"We owe it to them to always honour their memory, never forget their sacrifices, and to strive as a nation to build peace, justice and freedom everywhere."

The remains were found during a recent recovery mission conducted by the Defense POW/MIA Accounting Agency (DPAA) and will be sent to a forensics lab in Hawaii for further analysis, the embassy said.

DPAA works under the US Department of Defense and aims to account for the more than 82,000 missing service men and women from conflicts dating back to World War II.

There are currently 632 US service members still unaccounted for in Myanmar from World War II and DPAA has so far identified 14 missing service members.