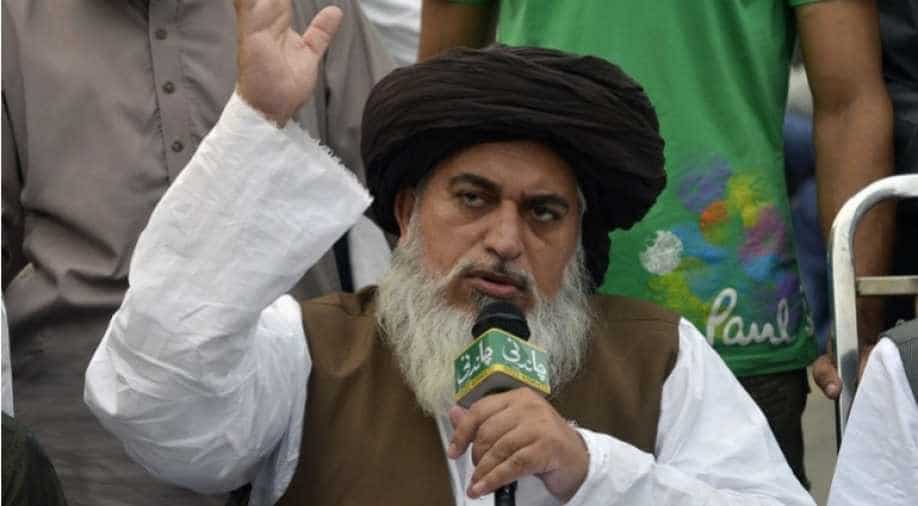 Pakistani Police on Saturday booked over 2,000 people, including the chief of a radical Islamist party, under terrorism and other charges of rioting, attempting murder and hurling threats in different parts of Punjab province during the three-day protests following the acquittal of Christian woman Aasia Bibi.

Ahmad said 40 of them are nominated suspects.

In all cases, police officials have become complainants, he added.

Asia Bibi, a 47-year-old mother of four, was convicted in 2010 after being accused of insulting Islam in a row with her neighbours. She always maintained her innocence but has spent most of the past eight years in solitary confinement.

In a landmark judgement Wednesday, a three-judge bench of the Supreme Court headed by Chief Justice Saqib Nisar overturned the conviction of Aasia Bibi facing execution for blasphemy, sparking protests led by the TLP and other groups across Pakistan.

"A number of policemen have been injured as the protesters had blocked the city on at least 46 points during Wednesday to Friday," Ahmad said, adding police have detained around 20 nominated suspects.

A source in the police department said there has been an instruction from the "top" not to arrest the TLP leadership with whom the government reached an agreement on Friday to end country-wide protests on the acquittal of Aasia Bibi.

According to police, Sheikhupra and Faisalabad districts police have registered FIRs against 300 and 200 people, including the local leadership of TLP, respectively for causing injuries to policemen and torching vehicles and damaging public-private properties.

Hours after the killing of Godfather of Taliban Maulana Samiul Haq, the TLP Friday announced ending sit-ins across the country following reaching a deal with the government on the issue of acquittal of Aasia Bibi.

As per the agreement, the government will immediately initiate a process to place the name of Asia Bibi on the no-fly list (exit control list).

The government has also promised to take appropriate legal action to redress any deaths that may have occurred during the protests against the verdict and to release all people picked up in connection with the agitation starting October 30.

According to a source in the government, the military establishment played its role in persuading the TLP to end the protest. In TLP's November 2017 Faizabad Islamabad sit-in on the issue of finality of Prophet Muhammad, a top officer of the spy agency ISI brokered a deal between the TLP and the then PML-N government.

The TLP leadership during the protests had declared the Supreme Court bench judges liable for death for acquitting Aasia Bibi and Army Chief Gen Qamar Javed Bajwa 'non-Muslim'. They also instigated the Muslim generals to revolt against the army chief.

The Imran Khan government has not yet confirmed about the status of Aasia Bibi whether she is released from the Multan jail or still languishing there or left the country. However, TLP leader Pir Afzal Qadri has claimed that Aasia Bibi has been sent back to jail again on "our demand."