Sexist remark against Priyanka Gandhi: Will politicos mind their language? 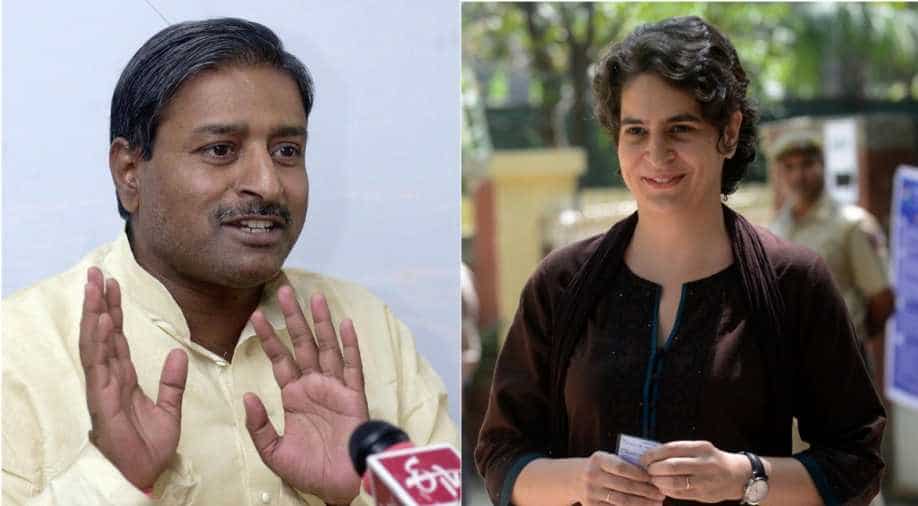 Priyanka Gandhi laughed off the BJP politician's crude sexism saying," ...he exposes the BJP's mindset towards the better half of the population of India!" Photograph:( AFP )

By Gargi Gupta and Iftikhar Gilani

They may have gone to space, won medals and been prime minister and president, but for Vinay Katiyar, and of his ilk, women in politics are only as good as their faces -- the prettier the better. And winning an election is a simple matter of fielding the prettiest face. Like a Miss India contest.

Priyanka Gandhi, in contrast, showed remarkable sangfroid when she just laughed off the BJP politician's crude sexism. Round one, in the gender sensitivity stakes, definitely goes to the Congress. Priyanka (45), daughter of Congress president Sonia Gandhi, who has been made a star campaigner by her party to help out in the UP elections reacted to Katiyar's comments, saying he makes her laugh "because he exposes the BJP's mindset towards the better half of the population of India!"

Katiyar, however, remained unapologetic, asserting that there is nothing wrong in calling someone beautiful and should not be dubbed as sexist as he had no dirty motive except to state that "we too can field beautiful women (as star campaigners)" when a reporter asked if Priyanka's presence would make a difference to the Congress' fortunes. He added that all he wanted to convey was that "it is wrong and unfair to compare beauty with capability but the Congress is doing this" and it should not be seen as objectifying a woman.

Asked to explain what many called "objectification", Katiyar refused to apologise and said: "I think Smriti Irani is as beautiful and she is also campaigning." To this Priyanka Gandhi, said: "Ha ha ha. He's right...they do! And if that's all he sees in my colleagues who are such strong, brave and beautiful women that have battled through all sorts of hardships to get where they are, then he makes me laugh even more."

"I hope he didn't mean what he said," said Poonam Mahajan, MP and BJP Yuva Morcha president. She, however, distanced the BJP from the controversy by saying that the party does more for women than the Congress. It is the Congress which can't get over its Gandhi mindset, she added.

Katiyar, who was the BJP's Ram Mandir face in the 1990s, is known for his pungent remarks. He even lobbied to be declared as the BJP's chief ministerial candidate, though he was dropped from even the party's list of 40 star campaigners.

Priyanka Gandhi's businessman-husband Robert Vadra also jumped in, slamming Katiyar and demanding a public apology from him for his "misogynist and atrocious remark". Hitting the Twitter handle, he wrote: "This exposes the shameful mindset of some of our political leaders. We all need to respect women and accept them as equals."

"We, as a society, have to stop commoditising and objectifying women. Katiyar should publicly apologise for his remarks," Vadra said in another tweet. But Katiyar and Sharad Yadav, who voiced that other misogynistic shocker - that the vote's izzat was greater than the izzat of his voters' womenfolk - are the norm rather than the exception in Indian politics, and the Congress – though on the moral high ground this time - is not free of women-baiters either.

Vaasanthi, the author of a recent book on J Jayalalithaa, entitled Amma: Jayalalithaa's Journey from Movie Star to Political Queen, recounts how, soon after posters came up announcing the then prominent filmstar's first political rally in the town of Kudallur, DMK leaders began to refer to it as the "Kudallur cabaret".

The sexual innuendo was to get worse. In the book Vaasanthi writes, "Jayalalitha was asked in an interview why she was in politics and she replied, quoting Gandhiji that she was there to serve the people. DMK miscreants turned around what she said - young men of Tamil Nadu,' they told their supporters, here is a person offering her body in service to the people," she recounts another instance of gender persecution of women who would later be revered and feared as Puratchi Thalaivi early in her career.

If a woman politician had made it big, it must be because of a 'sugar daddy' - so the innuendo went. In his book, Behenji, journalist Ajoy Bose refers to the disgruntled whispers within the BSP when the party founder promoted Mayawati over the heads of senior, male party members, and the open speculation of a relationship.

And if you want to run her down - make disparaging innuendoes about how she looks, and how few men would want her as SP chief Mulayam Singh Yadav is widely alleged to have done after the shocking incident in 1992 when Mayawati locked herself inside the Lucknow state guest house while a large mob of SP workers wrecked violence outside, threatening, she has always said, to rape and kill her.

In other words, if you can't stop her with words - use other means, i.e. violence. Mamata Banerjee, the other intrepid women politician in India, has alleged that's how the Left Front wanted to silence her, pointing to how she was beaten up by police and left goons in 1993, when she was leading a Youth Congress rally.

Ironic, isn't it, that all three women politicians have a reputation of ruling with an iron hand?