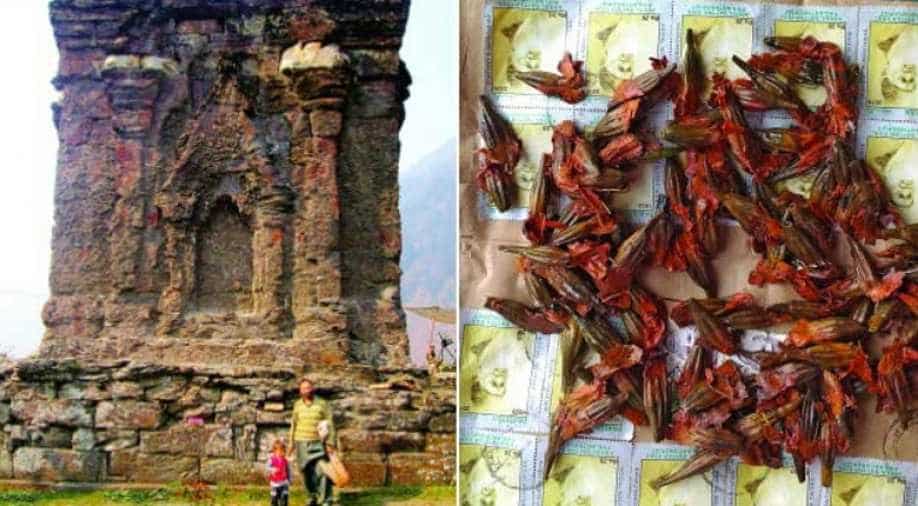 The Sharada temple, and (right) the holy soil of the temple that arrived from PoK (Ravinder Pandita) Photograph:( DNA )

Emotional scenes were witnessed when a small packet containing the holy soil of ancient Sharada temple arrived from Pakistan Occupied Kashmir (PoK). No sooner was the packet opened in a function at Jammu, the Kashmiri Pandits lined up to apply the sacred soil on their foreheads as a mark of respect and devotion to Goddess Mata Sharada.

It was after almost 70 years that the Kashmiri Pandits, who have been fighting for permission to visit the ancient temple, received a memorabilia from the holy temple. The ancient temple lies in ruins in PoK, and the faithful haven’t had access to it given that almost all Hindus living across the LoC migrated to India after the partition.

What added an interesting dimension to the cross-border bonhomie was that a local Muslim forester in PoK, Rayees Ahmad, sent a packet of holy soil by registered post to Ravinder Pandita, Delhi chapter head of All Party Migrant Coordination Committee (APMCC), so that Kashmiri Pandits could have a feel of the holy temple.

“Tilak was applied by all the participants from the soil brought from Sharada. It was a poignant and an emotional scene when the soil was received and obeisance paid for the first time after Partition,” said Pandita.

Situated 207 kilometres north of Muzaffarabad, capital of PoK, in Athmuqam Neelam Valley, the Sharada temple is located near the confluence of Kishan Ganga river and Mudhumati stream. The exact date of establishing the temple is unknown, however, the present style and form of the shrine was established by King Lalitaditya in 724 AD.

Before independence, the annual yatra to Sharada temple was a tradition conducted from ancient times. During the Dogra rule in 1846, it became a regular feature. Historical facts reveal that a Buddhist University was established near the shrine during the period of Emperor Ashoka in 273 BC known as Sharada Peeth.

“The last pilgrimage was undertaken by Swami Nand Lal Ji of Tikker Kupwara fame in 1947. He left for heavenly abode in 1968 but one of his disciples, Swami Mast Bab Ji of Hushru fame, is still alive. In fact, at the time of partition, Swami Nand Lal Ji carried idols from Sharda to Tikker on horses. A few of these stone idols are lying at Devibal in Baramulla besides Tikker in Kupwara,” informed Pandita.

70 years on, the Kashmiri Pandits have been demanding revival of the pilgrimage and reopening of Sharada temple for Hindu devotees of the country and Jammu and Kashmir. In fact, APMCC chairperson Vinod Pandit led a fast unto death some years ago for reopening of the temple as well as some other issues.

“A few years back, I applied for permission to visit the temple using the cross LoC peace bus, but I was told by the state government to approach the Pakistan high commission for visa. If a Muslim can go to PoK on a permit, why should I not be allowed to visit on permit system,” questioned Vinod.

In fact, locals in PoK have set up Save Sharada Committee, and APMCC is in the process of opening and registering such a committee in India too. History was scripted in November last year when flowers were offered at the temple on behalf of Ravinder Pandita by the Civil Society of Neelum Valley for the first time since 1947.