Pakistan's 'goat on wheels' app is a big hit this Eid 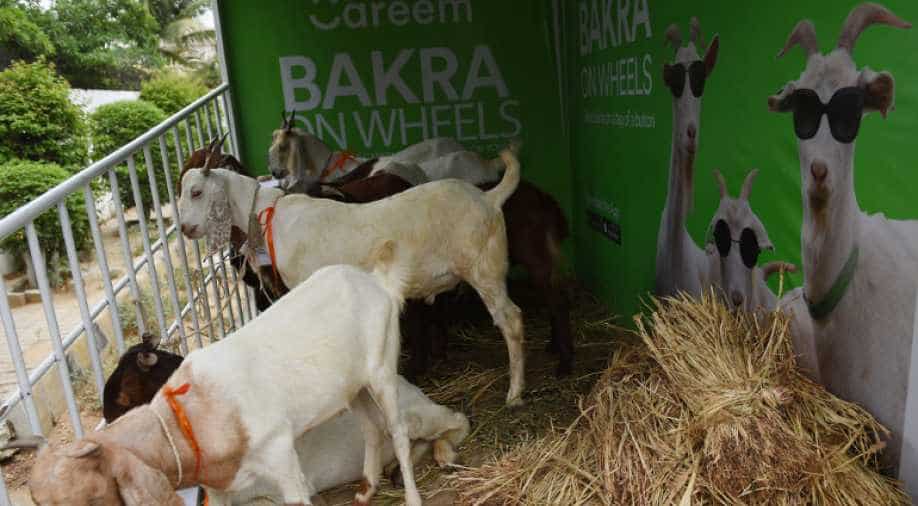 Goats are seen in a vehicle of the Careem's cab service 'Bakra on wheels' outside the Careem office ahead of the Muslim festival Eid al-Adha, in Karachi. Photograph:( AFP )

Muslims slaughter an animal, a goat, sheep, cow, bull or camel, on the annual festival in a ritual that stems from the story of the prophet Abraham, commanded by God to slaughter his beloved son Ismail.

Pakistan's cattle markets have been crammed for weeks as the Muslim country prepares for the sacrificial festival of Eid al-Adha this weekend, but in Islamabad and Karachi crowd-weary residents are ordering animals by app instead.

Muslims slaughter an animal, a goat, sheep, cow, bull or camel, on the annual festival in a ritual that stems from the story of the prophet Abraham, commanded by God to slaughter his beloved son Ismail.

The meat is then distributed in equal parts to the poor, to relatives, and consumed by the family themselves.

The centuries-old festival is steeped in tradition, but this year some middle-class Pakistanis are turning to technology to skip the packed markets and ordering their animals via the ride-sharing app Careem.

The app, which is growing in popularity in Pakistan, introduced a "Bakra (goat) on wheels" initiative in the run-up to Eid, with specially-painted trucks ferrying the animals to customers.

But there was little chance of it threatening demand for animals at the country's bustling cattle markets.

At one market set up temporarily in Islamabad, this week farmers from across the country soaped and shampooed goats and camels, some shaving patterns into their coats to make them look more appealing in the eyes of judicious customers.

Social media was flooded with videos showing camels being transported by rickshaw and sheep clinging to the back of motorcycles as Pakistanis shepherded their purchases home.

Experts say that the livestock market in Pakistan is growing by up to four per cent annually as more young entrepreneurs are taking interest, and volume is high during Eid, explained trader Syed Hayat Raza Naqvi.