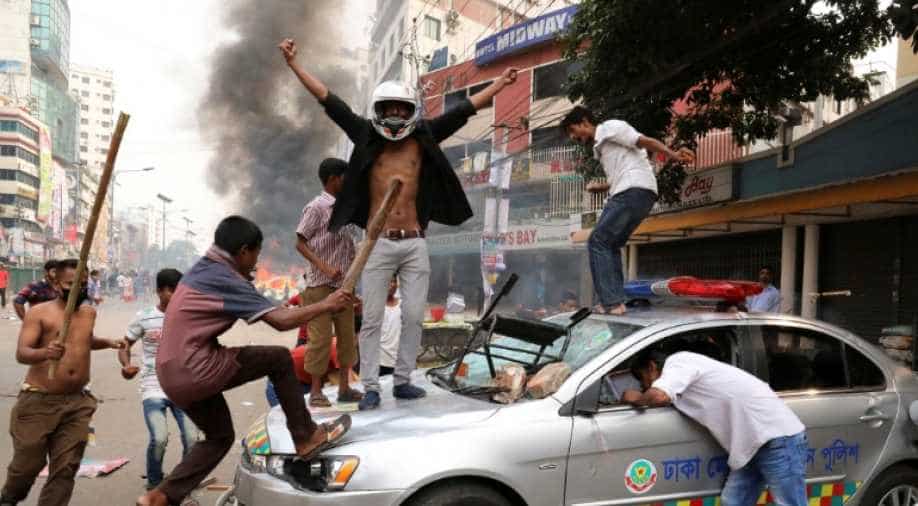 Authorities suspended high-speed 3G and 4G internet services for several hours in an effort to fight what a telecoms watchdog official called the "propaganda" fuelling unrest.

A ruling Awami League party supporter was killed by opposition Bangladesh Nationalist Party (BNP) followers, police said. The BNP claimed 19 more of its activists had been detained ahead of Sunday's vote.

Authorities suspended high-speed 3G and 4G internet services for several hours in an effort to fight what a telecoms watchdog official called the "propaganda" fuelling unrest.

The official campaign ended after seven weeks of widespread street clashes and accusations of an official crackdown on the opposition.

An opinion poll indicated Hasina is favourite to win despite the controversy.

Police said the Awami League supporter was beaten to death in the northeastern city of Sylhet late Thursday.

They had already reported the deaths of two Awami League activists since the campaign opened on November 8. The BNP says eight of its supporters have been killed in election clashes.

Nineteen BNP activists were arrested when police and paramilitary guards raided the election camp of a party candidate and several villages in southern Bangladesh, police and BNP officials told AFP.

Police were also investigating a suspicious fire at the headquarters of the National Unity Front opposition alliance in Dhaka on Friday.

Thousands of Awami League supporters rallied in the capital as candidates made a last-minute pitch for votes.

The BNP, which says thousands of its activists have been locked up as part of a bid to rig the election, said it had been prevented from holding its final rally in Dhaka.

Hasina has shrugged off accusations of using authoritarian tactics, and concentrated her final campaign on urging Bangladesh's 104 million voters to give her a new term to boost the impoverished South Asian nation's economic development.

The economy has grown at an average of 6.3 percent every year since she won a landslide in December 2008. She has vowed to improve this.

"Much work is still pending and it depends on the people casting a vote for us. Then we will be able to return to power and complete the work," she said late Thursday.

The BNP accuses the prime minister of clamping down on democracy and freedom of speech -- including over the jailing of its leader Khaleda Zia this year on graft charges.

The party says that 9,222 workers and supporters were arrested during the election campaign and that half of its candidates were attacked by ruling party supporters.

Its Islamist ally, Jamaat-e-Islami, says more than 3,600 of its activists were also detained.

The opposition has depended on social media to lobby for votes, saying that harassment has confined many candidates to their homes.

But it stepped up its call for people to vote on Sunday. "On that day this country will be yours. You will take back its ownership," BNP deputy chief Fakhrul Islam Alamgir said in a video posted to Facebook.

The campaign troubles have put Bangladesh in the international spotlight.

US ambassador Earl Miller said "the United States is concerned by the high level of campaign violence over the last two weeks," following a meeting with Bangladesh's election chief late Thursday.

He added that while all parties have been victims, "it appears opposition party candidates have borne the brunt of most violence."

Miller said everyone in Bangladesh must be able to vote "without harassment, intimidation, or violence".

UN Secretary-General Antonio Guterres also called for a vote "free of violence, intimidation and coercion," according to a spokesman.

Sheikh Hasina won a landslide victory in 2008 and the BNP boycotted the 2014 election, saying it was not free and fair, gifting her a return to power.

Since her last victory, civil society and rights groups have accused Hasina's government of silencing dissent and muzzling the press.

Zia, an arch-rival of the prime minister, was jailed for 17 years this year on graft charges that her party says are politically motivated.