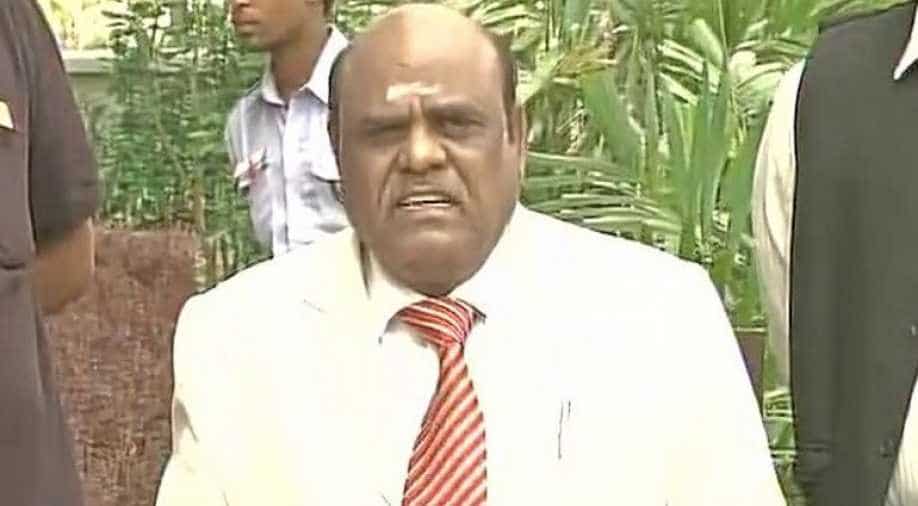 Justice Karnan has been sentenced to six months in jail. Photograph:( Twitter )

Calcutta High Court judge Justice CS Karnan today moved the Indian Supreme Court seeking a recall of an order for his arrest after he was found guilty of contempt of court. The apex court had ordered his arrest and sentenced him to a six-month jail term.

A petition in this regard was mentioned before a five-judge Bench headed by Chief Justice of India (CJI) J S Khehar which agreed to look into it.

When the CJI asked where Justice Karnan was, Nedumpara said he was "very much in Chennai". Nedumpara also said 12 advocates on record had refused to represent Justice Karnan.

However, some Indian media outlets have reported that Justice Karnan had left probably already left the country. When the West Bengal police team reached the Chennai state guest house where he had checked in with two of his advocates, they found that all three had left, without clearing their due.

The police team then visited the famous Hindu shrine in Srikalahasthi, Andhra Pradesh, that the judge was supposed to be visiting, perhaps to pray for divine help, but they could not trace Karnan.

At present police teams from three Indian states are looking for the missing judge. The plea on behalf of Justice Karnan was today mentioned before the Bench which had just concluded the day's hearing on the issue of triple talaq.

The seven-judge bench of apex court had on May 9 passed the order sentencing Karnan to jail by holding him guilty of contempt of court and ordering the West Bengal police to take him into custody.

Karnan was found guilty of contempt of court after he named 20 sitting judges as corrupt and wrote to Indian Prime Minister Narendra Modi to initiate a probe.

The Supreme Court had also barred the Indian media from reporting on any of the utterances by Justice Karnan.