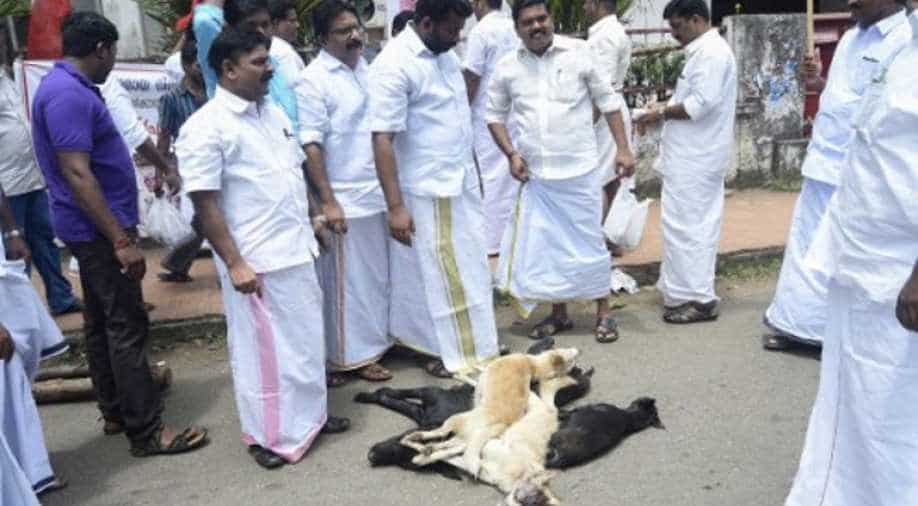 The apex court has been hearing a batch of petitions on issues relating to orders passed by various civic bodies on culling of stray dogs which have become a menace, especially in Kerala. Photograph:( AFP )

"Stray dogs have a right to live," was how India's top court reacted sharply today when a submission was made that such canines should be completely destroyed across the country.

A bench of Justices Dipak Misra and R Banumathi observed that though culling of stray dogs was permissible, there has to be a balance and a proper method for this.

When one of the petitioners told the apex court that he wanted to "totally destroy" stray dogs across India, the bench said "nobody can destroy stray dogs in entirety. They also have a right to live".

Additional Solicitor General (ASG) Pinky Anand concurred with the observations of apex court and said that stray dogs have a right to live and there has to be a balance.

The apex court has been hearing a batch of petitions on issues relating to orders passed by various civic bodies on culling of stray dogs which have become a menace, especially in Kerala and Mumbai.

During the hearing, the bench said in Kerala, there were issues of human concern but for this all stray dogs cannot be killed.

"A person can die due to dog bite. It is an accident and for that, we cannot say kill all the stray dogs," it said.

The bench was also informed that a panel headed by former Kerala High Court judge Sri Jagan had received around 400 matters related to dog bites and it was working on it. The panel was set up by the apex court to inquire into incidents in which people and even children killed stray dogs and these acts were supported by several vigilante groups in Kerala.

"The panel has received around 400 applications out of which 24 have been settled. The committee is working on it," one of the counsel told the bench, which listed the matter for further hearing on March one.

When an advocate told the court that people have died due to dog bites in Kerala and children were unable to go to school due to this menace, the bench said "just because there are some stray dogs in a field or a school, they cannot be killed".

"They (stray dogs) have to be taken to shelter homes ....If there is no way out, they have to be culled and not killed. But there has to be a method for it," it said.

To this, one of the petitioners said he would construct shelter homes for dogs in his area in Kerala but the apex court asked him to submit a concrete proposal and prepare a road map.