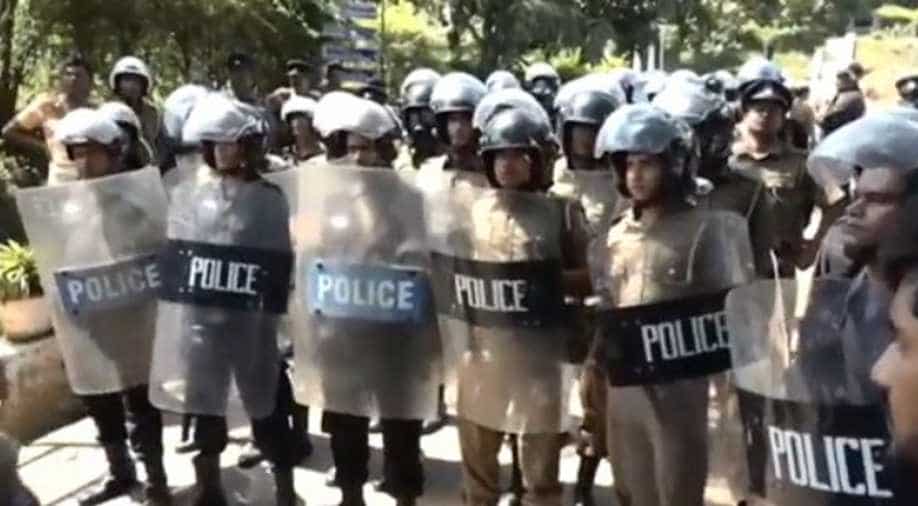 Police said there had been riots and arson attacks since the weekend in Kandy, home to tea plantations and Buddhist relics. Photograph:( Reuters )

Curfew was re-imposed today in Sri Lanka's riot-hit Kandy district with immediate effect until further notice following reports of violence between majority Sinhala Buddhists and minority Muslims in other areas of the multi-ethnic district.

The authorities yesterday imposed curfew till this morning after communal violence erupted in the Theldeniya area of the central hill district that left two persons dead and damaged several mosques and homes.

Government spokesperson Rajitha Senaratne said that the curfew has been extended to prevent further violence.

Police fired teargas shells to disperse rioters in curfew-bound areas hours after a state of emergency was imposed in a bid to quell anti-Muslim violence, a senior police official said.

Following the incidents of violence, president Maithripala Sirisena yesterday declared a state of emergency and deployed the police and military to prevent further violence.

It was the first time since August 2011 that a state of emergency was in force in the Indian Ocean's island nation.

In the incidents of overnight violence in a Kandy suburb, Menikhinna, three policemen were injured while seven people were arrested for breaking the curfew and trying to cause unrest, police spokesman Superintendent of Police (SP) Ruwan Gunasekera said.

The government sent troops and elite police commandos to Kandy, home to famous tea plantations and Buddhist relics, to restore order and enforce the curfew.

The curfew was lifted last morning but was re-imposed soon after several mosques, shops and homes belonging to the minority community were badly damaged in the attacks by the Sinhalese Buddhists.

Sri Lanka has a long history of the state of emergency during the LTTE rebellion both in the south and the Tamil minority-dominated north and east of the island.

Schools in Kandy, which is about 115 kilometres from Colombo, remained closed today.

The Sri Lanka government also has restricted the access to the internet and blocked social media site Facebook in the Kandy district.

This has been done to prevent the spread of false information, the government spokesperson said.

The government ordered more troops to reinforce police and stop the unrest spreading.

Meanwhile, following the declaration of a state of emergency, foreign governments, including the US and the UK, have asked their nationals visiting the island nation to "exercise caution, avoid protests and rallies, and comply with local security requirements".

The UN spokesman said that Feltman will reach Colombo on Friday for a three-day tour and is also expected to visit Kandy.