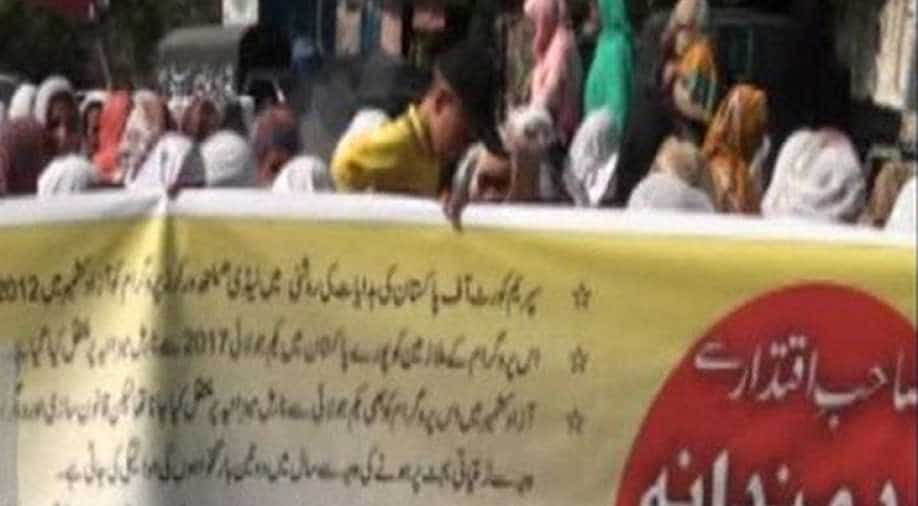 Pakistan occupied Kashmir, has a Prime Minister and a President but is ruled from Islamabad. Photograph:( ANI )

"In Pakistan's all four provinces the workers are getting regular salaries, but here, we have not received our pay for the past 8 months," she added.

It has been several months that these employees have not received their salaries.

Blaming Islamabad for its discriminatory policies against them, the protestors, who are working in health, education and other government sectors in PoK, have been demanding regular jobs.

"One of our colleagues who had not received the salary for the past 8 months died because of illness. In July 2017, the government assured us to provide regular salaries as it was passed in the assembly. But, we have not received our salaries," said Syda Sarvar Abbasi, a woman protester.

"In Pakistan's all four provinces the workers are getting regular salaries, but here, we have not received our pay for the past 8 months," she added.

Shamim Bibi, another woman protester said, "Whenever we come to protest, they give us 3-4 months' salary. We don't want salaries. We demand regular jobs. We have been doing all sort of work. In July 2017, the Supreme Court of Pakistan declared that our jobs should be made regular and the Government will give our salaries. Now, we will go to Supreme Court of Pakistan, which will decide our fate".

Another protestor questioned why were they being punished and for what reason.

Blaming the politicians, the protester said, "They (politicians) have increased their salaries manifold whereas our salaries are very less".

Tall promises have been made by the Pakistani establishment to bring development in Pakistan-occupied Kashmir, but, the corrupt administrative system has made it one of the most backward regions under its rule.

Pakistan occupied Kashmir, has a Prime Minister and a President but is ruled from Islamabad.

The Prime Minister of Pakistan is the chairman and chief executive of the Azad Jammu and Kashmir Council that manages all affairs related to PoK.