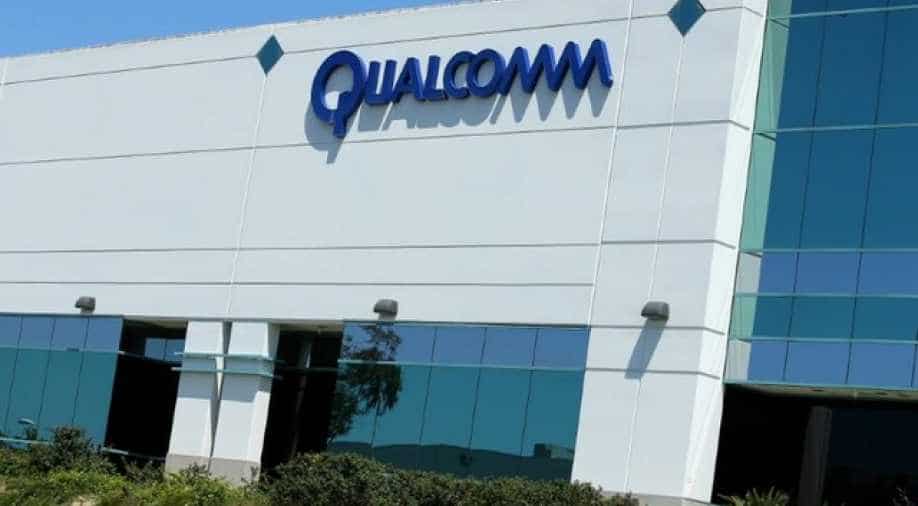 A Qualcomm sign is pictured at one of its many campus buildings in San Diego, California, US Photograph:( Reuters )

Qualcomm, which also supplies chips to Apple, said the six patents help devices perform well without draining the battery.||Qualcomm says it will ask the US ITC to ban imports of the infringing Apple devices.

Chipmaker Qualcomm will ask the US International Trade Commission to bar Apple from selling some iPhones and iPads in the United States that use chips made by competitor Intel on the grounds that the devices infringe on six Qualcomm patents.

In a request that would broaden its legal battle with Apple, San Diego-based Qualcomm said it will ask the US ITC to ban imports of the infringing Apple devices. A related lawsuit was filed in federal court in California to request monetary damages.

Apple referred reporters to its earlier comments on the dispute with Qualcomm, which accuse Qualcomm of unfairly imposing what Apple calls a "tax" on Apple devices using Qualcomm chips.

In its complaint to the ITC, Qualcomm asked the body to ban "iPhones that use cellular baseband processors other than those supplied by Qualcomm’s affiliates." Qualcomm did not name Intel, but Intel began supplying chips for some iPhones starting with the iPhone 7.

Qualcomm has not alleged that Intel chips violate its patents but claims that the way Apple implements them in the iPhone does. Intel declined to comment.

Stacy Rasgon, an analyst at Bernstein, said ITC cases typically take 16 months to conclude and the case was unlikely to affect Apple's 10th anniversary iPhone launch expected this fall. "I doubt this puts a lot of immediate pressure on Apple," Rasgon said.

There has been long-running tension between Qualcomm and Apple over Qualcomm's practice of taking a cut of the total price of the phone in exchange for "modem" chips that help phones use wireless networks data plans.

The ITC is a popular venue for patent disputes because it handles cases relatively quickly and can more easily bear an infringing product from the US market than federal courts.

Animosity between the two companies burst into open in January, when the US Federal Trade Commission filed a lawsuit against Qualcomm and accused it of using "anticompetitive" tactics to maintain its monopoly on a key semiconductor used in mobile phones.

The FTC, which enforces antitrust law along with the Justice Department, said that Qualcomm used its dominant position as a supplier of certain chips to impose "onerous" supply and licensing terms on cellphone manufacturers and to weaken competitors.

Days later, Apple sued Qualcomm for $1 billion, accusing it of overcharging for chips and withholding promised rebates because of Apple's discussions with South Korea's antitrust regulators in their probe of Qualcomm.

Separately from this dispute, Qualcomm is a major supplier to both Apple and Samsung Electronics for modem chips that connect phones to wireless networks.