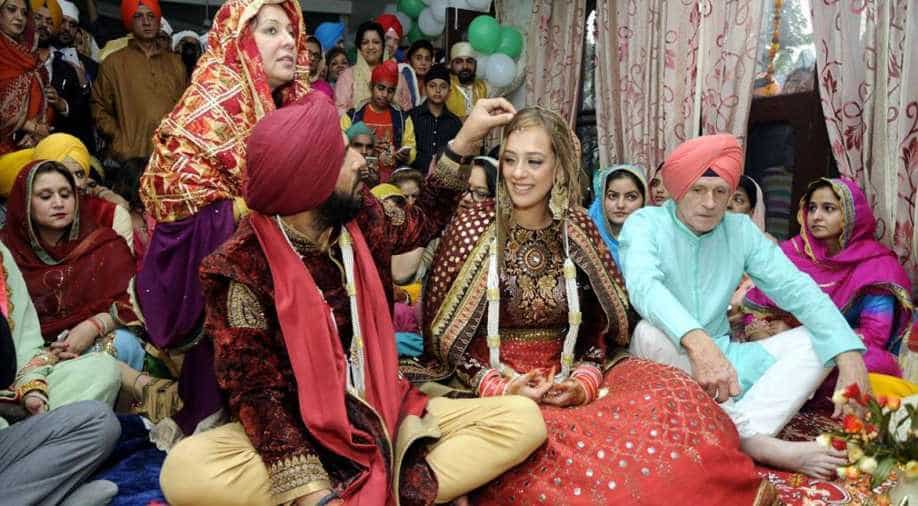 An inside pic from Yuvraj Singh's nuptials in Chandigarh. Photograph:( Twitter )

Newly-weds Yuvraj Singh and Hazel Keech arrived in Goa today for their Hindu-style nuptials which will be held at a sea-facing resort on December 3.

Meanwhile, speculation is rife that Hazel, a British-origin actress who has acted in Bollywood films, was christened Gurbasant Kaur during her wedding ceremony in Chandigarh. The actress was reportedly addressed by the name by the priest performing the rituals, which were performed as per Sikh traditions at the dera of a spiritual leader, Baba Ram Singh, about 40 kilometres from Punjab capital Chandigarh. Baba Ram Singh reportedly suggested the actress change her name.

While the Chandigarh wedding was a relatively solemn affair, attended only by the cricketer's close friends and family, the Goa nuptials are expected to be a fun-filled extravaganza.

A host of celebrities from the world of cricket and Bollywood are also expected to be a part of the festivities in Goa. Among those in attendance will be Yuvraj's close friend, Team India vice-captain Virat Kohli and his actress-girlfriend Anushka Sharma, the grapevine suggests.

Prime Minister Narendra Modi, actors Shah Rukh Khan, Salman Khan and Amitabh Bachchan are the A-listers expected to lead the celeb roll call at the reception in Delhi on December 7.