Pirates Of The Caribbean 5 movie review: Johnny Depp?s fails to impress as Jack Sparrow but Javier Bardem breathes life into the film 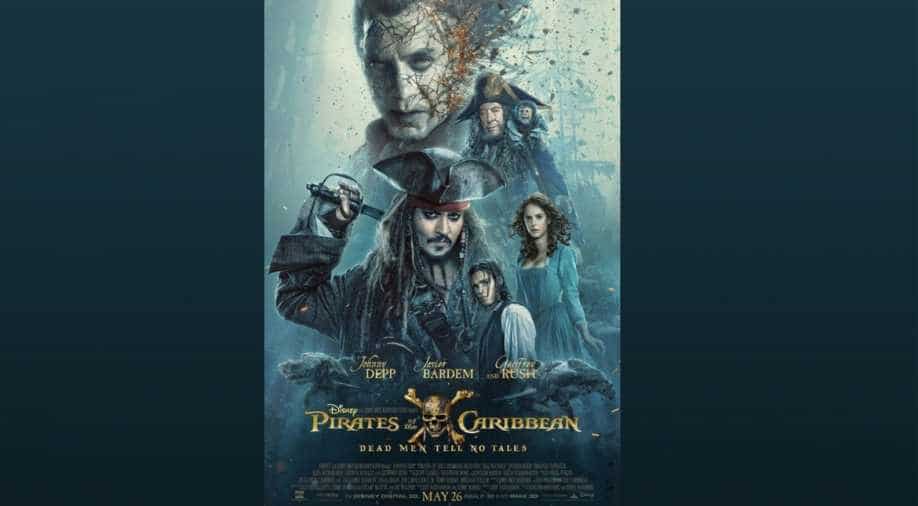 Johnny Depp is back as Captain Jack Sparrow with Pirates Of The Caribbean: Salazar?s Revenge, six years after his last outing.

In order to free his father (Will Turner) from the curse, Henry Turner decides to hunt the ‘Trident of Poseidon’ which most believe doesn’t exist. Helping him in his voyage is Carina Smythe and Captain Jack Sparrow. On their trail are Captain Barbossa, British Navy and the army of the undead, headed by Captain Salazar, who has a score to settle with Captain Jack Sparrow.

You know there is something wrong with a film when you enjoy a new character’s antics more than that of the iconic Captain Jack Sparrow. New entrant to the franchise, Javier Bardem as the undead Captain Salazar is the pick of the lot, closely followed by Geoffrey Rush’s Captain Hector Barbossa.

There is something about Javier Bardem. Every time he appears on screen you are left awestruck, even if he’s a mere spectator. He owns the screen the way very few can. The Spanish dialect he adapts for his character of the ‘Pirate Killer’ is the film’s highlight and speaks volumes about his talent. Of course his character is helped by some brilliant special effects.

Geoffrey Rush as Captain Barbossa, the main antagonist of the first part and since then an unlikely ally of Captain Jack Sparrow, is spot on. His character in this one feels like an extension of this month’s initial release Guardians Of The Galaxy Vol. 2’s fan favourite Yondu.

Kaya Scodelario as Carina Smythe is breathtakingly beautiful and an able performer. She is very easy on eyes from the first scene till the last. If they are planning to reboot the film next then Brenton Thwaites as Will Turner’s son Henry Turner is a good bet to take it forward.

Jack Sparrow’s crew, toplined by Kevin McNally as Gibbs, provide ample amount of humour. In fact there were only a few good laughs in the film, one being ‘the public execution’ scene.

Special Effects by Lucas Films is one of the best in recent times and may get the film an Oscar Nomination. Film has a high usage of background score and it helps in a big way, however, the iconic Jack Sparrow theme was underused.

Having said that, the film scores most in the cinematography department, for which we have Paul Cameron to thank. Besides that, there are fun action scenes, particularly the climax of the film which looks extremely beautiful and is bound to give you an adrenaline rush. In fact it saves the film from being a major disappointment.

You know a ship is in danger if its Captain is incompetent. That’s where lies the problem of this film. It breaks my heart to see the legendary Captain Jack Sparrow, played by Johnny Depp, becoming a caricature of itself. It felt like Depp was sleepwalking through the film. There was just no effort on his part. His half-hearted and disinterested performance makes the film a rather unpleasant watch. And it was not just his performance but the character he plays, too, had nothing to do in the film. His was probably the most unimportant and irrelevant character in the film even though he was made to be the main lead.

Even in earlier films, Jack Sparrow has always been this clumsy, goof ball but he always had a flair of smartness that helped him have the last laugh even against the biggest of his enemies. But here not once did he seem like a hero (except for a five minute flashback scene as Young Jack Sparrow), every damn time he is saved by either Henry Turner, Captain Barbossa or his own crew, and in fact the ‘Trident Hunt’ in the film is headed by Carina Smythe. So what exactly was he doing in the film? I have absolutely no idea. His was a hollow, soul-less character and served no purpose whatsoever to the film’s plotline. Captain Jack Sparrow had no relevance to the story at all. Period.

Storywise, the film had no novelty factor, with multiple sub-plots that tend to get confusing after a point. The pace was so slow at times, that even at an odd 129 minutes of its runtime, it might exhaust you.

In my opinion Jack Sparrow shouldn’t have returned as this was an insult to his legend. After watching the film, my reaction was similar to that of Henry Turner, when he sees Sparrow for the first time – disappointed. Watch the film solely for the majestic Javier Bardem and his performance as the undead Captain Salazar. In fact it won’t be wrong to call the ‘lifeless’ Captain Salazar, as the ‘life’ of the film. I give it a generous 2.5 stars, half extra for Bardem and that well executed, resounding climax.