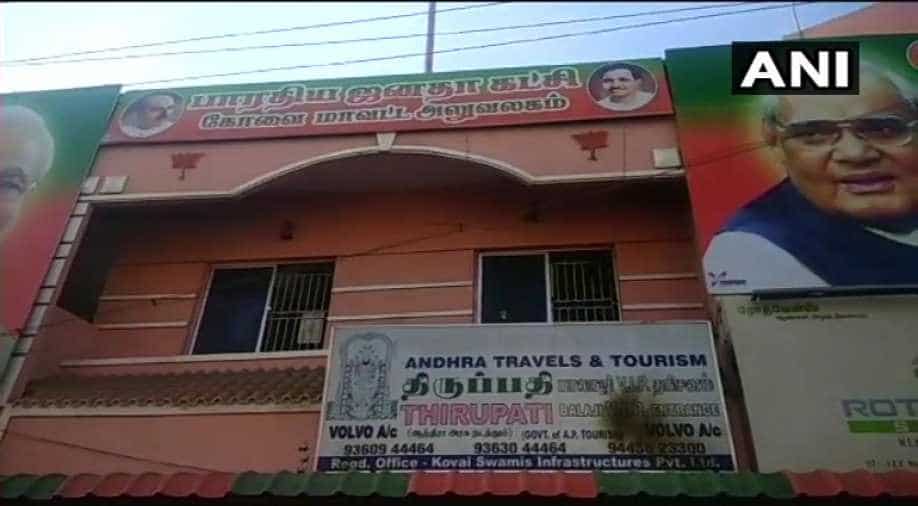 A video released by news agency ANI shows that a few men throwing the bomb at the BJP office. Photograph:( ANI )

A video released by news agency ANI shows that a few men throwing the bomb at the BJP office. The men managed to flee the spot after carrying out the attack. The attack on the BJP office comes against the backdrop of widespread violence in Tripura where state Assembly election results were declared recently.

A statue of Dravidian icon Periyar was allegedly vandalised in Vellore last night. The police have arrested two men. "One man is a BJP member and another a CPI worker," the police said.

According to the police, the act of vandalism occurred at around 9.15 pm in Tirupattur in Vellore district. The two men involved in the act were allegedly drunk. The statue was reportedly in front a government building.

This came after a BJP leader had hinted that statues of E V Ramasamy Periyar could be the next to be pulled down. A statute of Communist icon Lenin was allegedly bulledozed by suspected BJP workers in Tripura. Police have arrested two persons. The accused have been identified as Muthuraman and Francis. While Muthuraman was reportedly a BJP worker, Francis is suspected to be a CPI activist.

Yesterday BJP leader H Raja posted in Facebook in Tamil saying, “Who is Lenin and what is the connection between Lenin and India? What connection India has with Communists? Today Lenin’s statue removed in Tripura, tomorrow it will be the statue of EV Ramasamy in Tamil Nadu.”