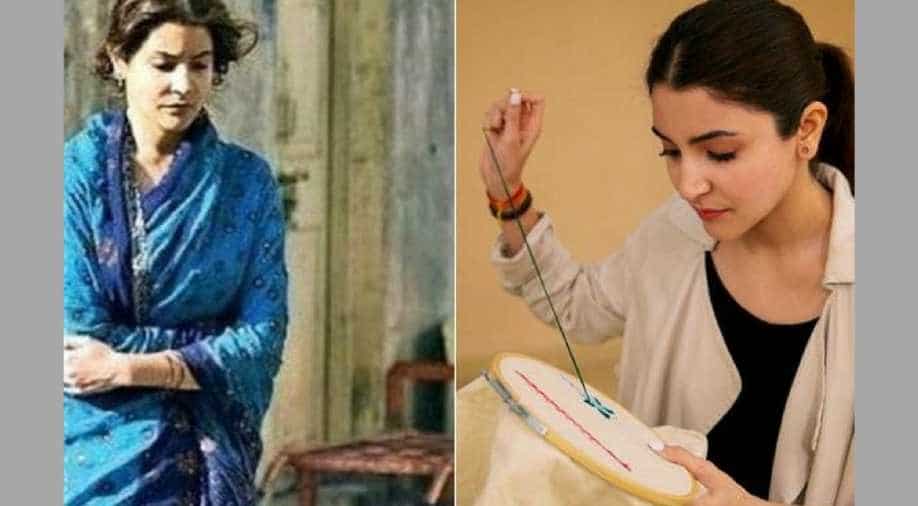 Anushka Sharma's look from Sui Dhaaga (left) and the actress learning how to stitch for the role (right). Photograph:( Instagram )

Increasingly experimental Anushka Sharma will next be seen in a de-glam avatar for her upcoming film with Varun Dhawan titled Sui Dhaaga: Made In India. While the actors and makers shared the first few stills from the movie to tease the audience last month, there are new videos and images in which the actress can be seen glued to her character's personality.

Mauji takes Mamta for a cycle ride! @anushkasharma rode pillion as @varundvn cycled for close to 10 hours in the sweltering heat at Chanderi. #SuiDhaaga | @yrf

In a video released by Yash Raj production house, Anushka can be seen with her head bent over, embroidering on a piece of cloth. The cast and crew were in Bhopal shooting for the film and have now returned to Mumbai.

As the name of the film suggests, the movie is inspired by the Make in India initiative. Directed by Sharat Katariyam the film will see Varun Dhawan and Anushka Sharma romance each other on the big screen for the first time. Varun plays the role of a tailor while Anushka is an embroider.

Regrann from @anushkasharma - Spent my day off buying lots and lots of Chanderi Sarees directly from the weavers who spend tireless amounts of time and energy making one beautful saree . Sometimes it even takes one whole month to make just one ! Huge respect to their art & craft ???????? @varundvn #MakeInIndia #IndianHandlooms #Handloom #Chanderi - #regrann

The movie is scheduled to release on September 28.