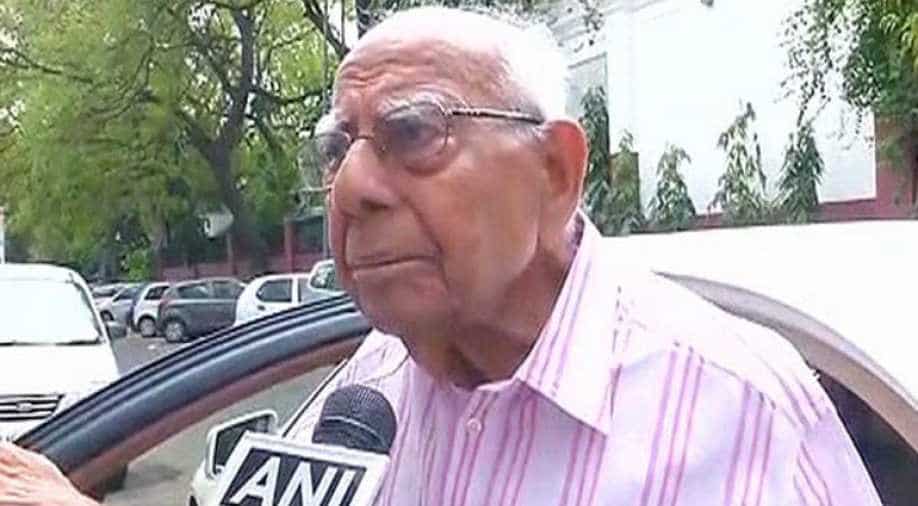 Jethmalani passed away at his residence in Delhi.

Former Union Law Minister and veteran lawyer Ram Jethmalani passed away at his residence in Delhi on Sunday morning.

Veteran lawyer Ram Jethmalani passes away at his residence in Delhi. He was 95 years old. (file pic) pic.twitter.com/Utai8qxxh4

He was keeping unwell for long.

Born on 14 September 1923 in Shikarpur in present-day Pakistan, Jethmalani has served a Union Minister apart from practicing as a lawyer.

PM Narendra Modi: I consider myself fortunate to have got numerous opportunities to interact with #RamJethmalani. In these sad moments, my condolences to his family, friends and many admirers. He may not be here but his pioneering work will live on! Om Shanti. https://t.co/cQ5OXrz4OE

He was appointed Union Law Minister as well as held the portfolio of Urban Development Ministry.

President Kovind: Saddened by passing of #RamJethmalani, former Union Minister & a veteran lawyer. He was known to express his views on public issues with his characteristic eloquence. The nation has lost a distinguished jurist, a person of great erudition & intellect. (file pic) pic.twitter.com/0zqb8CsSC5

Later in his career, he was chosen as the chairman of the Bar Council of India and was elected the president of the Supreme Court of India in 2010.

Union Home Minister Amit Shah: Deeply pained to know about the passing away of India’s veteran lawyer and former Union Minister #RamJethmalani ji. In him we have not only lost a distinguished lawyer but also a great human who was full of life. (file pic) pic.twitter.com/o94GELYtPg

Jethmalani has held some controversial and number of high-profile defence cases to his credit as a lawyer. Some of them include the Rajiv Gandhi assassination, Indira Gandhi assassination among many others. His recent case was in defence of Delhi chief minister Arvind Kejriwal in the defamation case filed by former Finance Minister late Arun Jaitley.

Jethmalani was appointed as the Member of Parliament, Rajya Sabha - once from Rajasthan and from Bihar in the year 2016.

He announced his retirement from the judicial profession in September 2017.