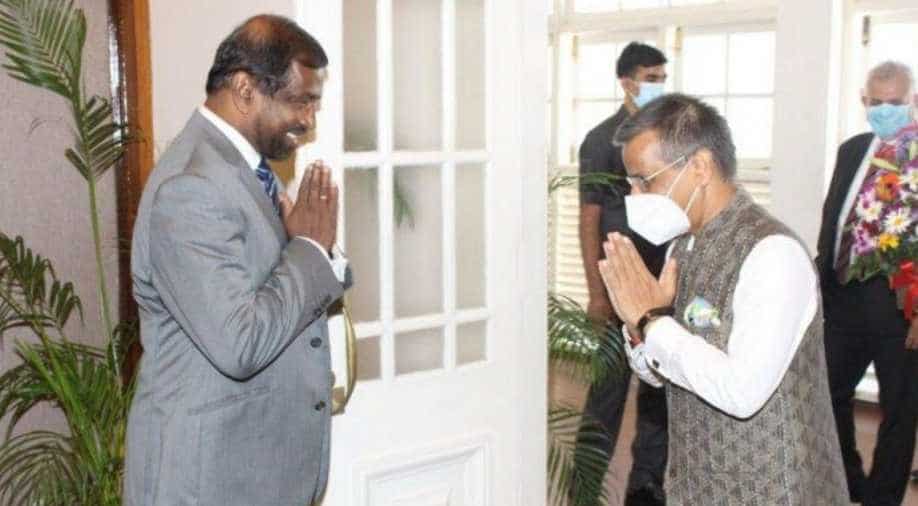 Commenting on the Chinese investment in the southern port of Hambantota, Colombage says that Sri Lanka had offered India Hambantota first.

Sri Lanka will adopt an "India first approach" as its new foreign policy plank and protect New Delhi's strategic security interests, the country's Foreign Secretary Jayanath Colombage has said as he sought to allay concerns amid China's growing presence in the island nation.

Admiral Colombage became the first-ever foreign secretary from a military background when he was appointed by President Gotabaya Rajapaksa to head the Foreign Ministry on August 14.

In an interview published by Daily Mirror on Wednesday, Colombage said Sri Lanka is to adopt an 'India first approach' as its new regional foreign policy plank.

"That means Sri Lanka will not do anything harmful to India's strategic security interests," said Colombage, who was the chief of the Sri Lanka Navy between 2012-14 and later became a foreign policy analyst mostly on the Chinese initiatives in Sri Lanka and the immediate region.

Colombage said that President Gotabaya Rajapaksa would have an India first approach as the key to strategic security.

''China is the second-largest economy and India is considered the sixth-largest. In 2018 India was the world's fastest-growing economy. That means we are between two economic giants,'' he said.

"Sri Lanka cannot afford, should not afford and will not afford any particular country to use it as a staging area to do anything against another country, especially so India," he said.

Commenting on the Chinese investment in the southern port of Hambantota, Colombage says that Sri Lanka had offered India Hambantota first.

India did not undertake it for whatever reason, then it went to a Chinese company, he said.

Now we have given 85 per cent stake of Hambantota port to China Merchant Holding Company. That should be limited to commercial activities. It is zero for military purposes," he said.

Colombage said that despite opposition from port worker trade unions, President Rajapaksa would go ahead with the memorandum of cooperation signed with India on the Colombo Port's Eastern terminal.

Colombo Port is the largest and busiest port in Sri Lanka. Located on the southwestern shores on the Kelani River, it serves as an important terminal in Asia due to its strategic location in the Indian Ocean.

The previous Sirisena government had signed a "memorandum of cooperation" (MOC) with India and Japan for a tripartite effort to develop the terminal which is located just next to the USD 500 million Chinese-run Colombo International Container Terminal.

''The President has said that he is ready to honour the agreement. As per the new guidance of the President, no national asset is given with total control to any country," he said.

Colombage said that the Rajapaksa foreign policy shift would mean that Sri Lanka would not be anymore reliant on a West-oriented policy.

The most dynamic foreign office officials would be posted in Sri Lanka's neighbourhood, in the Middle East, Bangladesh, Africa and ASEAN in line with the new foreign policy shift where the emphasis would be on the neighbourhood.

China has been making significant forays into Sri Lanka, especially in the defence field. Beijing's activities have caused regional concerns, especially in India.

Sri Lankan in 2017 handed over the Hambantota port to China on a 99-year lease. There are regional concerns, mostly from India, that China may make a military presence at Hambantota, located on a key sea international shipping route.