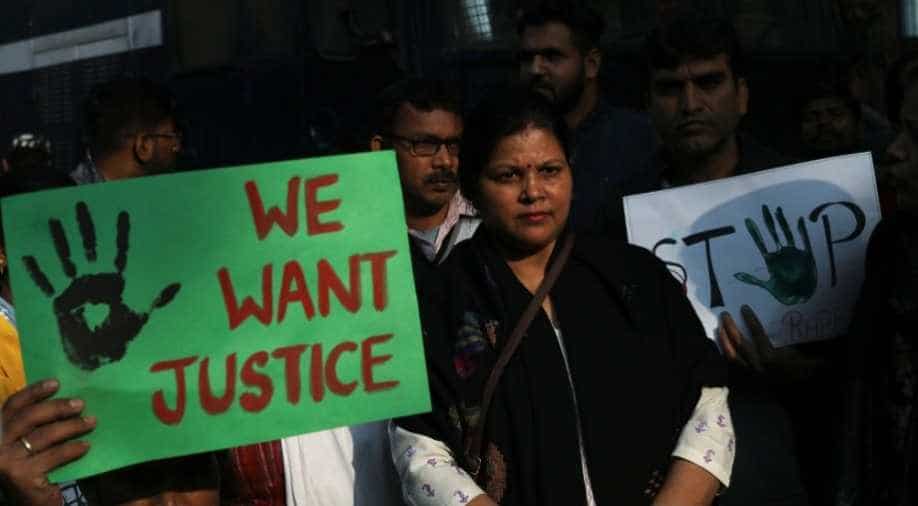 People hold placards and shout slogans as they take part in a protest against the alleged rape and murder of a 27-year-old woman on the outskirts of Hyderabad, in New Delhi. Photograph:( Reuters )

Shaheen Women Resource and Welfare Association carried out a protest at Charminar against the incident while the National Students' Union of India also held a peaceful rally against the "inhumane" incident here.

Massive protests were carried out in Telangana, along with several other parts of the country on Saturday against the brutal rape and murder of a woman veterinary doctor in the state.

Locals even hurled slipper at police personnel near Shadnagar police station here following which the police had to resort to lathi-charge to maintain law and order as protestors demanded that the accused be handed over to them.

Shaheen Women Resource and Welfare Association carried out a protest at Charminar against the incident while the National Students' Union of India also held a peaceful rally against the "inhumane" incident here.

Some students of government schools had even blocked Hyderabad-Bangalore Highway in protest against the crime.

Hundreds of people gathered in each protest.

In fact, the West Bengal wing of Bharatiya Janata Party (BJP) Mahila Morch even held a candlelight march in Siliguri against the crime and protests were also carried out by the Indian Youth Congress in the national capital.

Four people, identified as Mohammad Areef, Jollu Shiva, Jollu Naveen and Chintakunta Chennakeshavulu have been arrested in the case and sent to 14-day judicial custody by a Ranga Reddy court on Saturday.

The burnt body of the doctor was found at Shadnagar outskirts in the Telangana`s Ranga Reddy district. As per the preliminary probe, the police suspect that the veterinary doctor was sexually assaulted.