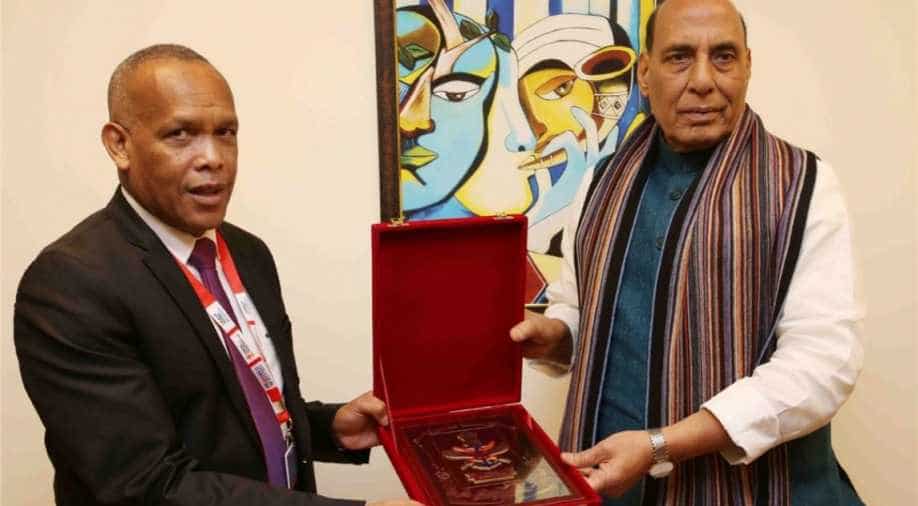 During the discussions, Singh stressed on enhancing ties in maritime security cooperation in the region, an official release said.

India and Madagascar on Thursday discussed maritime security cooperation, as part of their efforts to ramp up defence presence in western Indian Ocean.

On the second day of DefExpo 2020, Union Defence Minister Rajnath Singh held dialogue with Lieutenant General Rokotonirina Richard, his counterpart in Madagascar, an Indian Ocean island nation off the coast of East Africa and discussed a gamut of issues related to strategic partnership.

During the discussions, Singh stressed on enhancing ties in maritime security cooperation in the region, an official release said.

Singh said as maritime neighbours both countries have responsibility to ensure a secure maritime environment so that trade and commerce flourish.

Underlining the Indian president's visit to Madagascar in March 2018, he said the historic visit reaffirmed the excellent bilateral relationship between the two nations.

He emphasised that the MoU signed during the visit provided an enabling framework for defence cooperation between the two sides.

The DefExpo 2020 would provide a platform for both the countries to further strengthen the defence ties and in exploring various areas of mutual engagement, Singh said.

Gen Richard acknowledged that India has a great role to play in preserving security in the Indian ocean maritime region.

He expressed his government's sincere gratitude for 'Operation Vanilla', in which the Indian Navy provided assistance to the affected population of Madagascar post devastation caused by Cyclone Diane.

The defence minister of Madagascar invited Singh to the independence day celebrations on June 26 this year.