'I too have some rights': Nirbhaya's mother breaks down in Delhi court 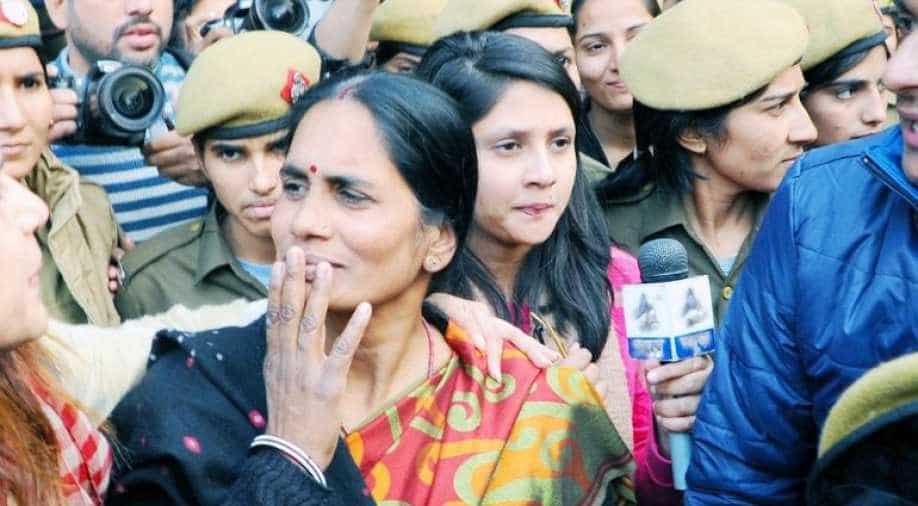 Additional Session Judge Dharmender Rana consoled her saying, 'Every lawyer here, this entire proceeding, is for giving you the justice.'

Nirbhaya's mother Asha Devi broke down in a Delhi court Wednesday requesting a fresh date to execute the four death row convicts for the gang rape and murder of her daughter and later sat on a protest outside the court premises.

"I too have some rights," she said to the judge after the court offered a lawyer to one of the four convicts - Pawan Gupta - from the District Legal Services Authority (DLSA), after his father said he had no lawyer to represent him at the time.

Additional Session Judge Dharmender Rana consoled her saying, "Every lawyer here, this entire proceeding, is for giving you the justice."

Nirbhaya's father, who was also present in the courtroom, added that giving a lawyer to Pawan at this stage was an injustice to the parents.

"Law has given them (convicts) right and not letting them avail that too will be an injustice," the judge replied.

After the court's hearing, Devi joined a protest being held by women rights activist Yogita Bhayana outside the Patiala House Courts premises over the delay in hanging of the four convicts.

"There is no appeal pending in any court in the country... I appeal to the Supreme Court to issue the death warrant as this court (trial) is in no mood to issue one," Devi said while talking to media, adding that she was "losing hope".

While raising slogans for hanging of the four convicts -- Mukesh Kumar Singh (32), Pawan Gupta (25), Vinay Kumar Sharma (26) and Akshay Kumar (31) -- Devi said: "We are waiting for justice. I assure rape victims that they will also get justice. But today I myself have lost hope."

Bhayana said, "The people of this country are losing hope with every passing day. When will convicts be hanged?"

The 23-year-old physiotherapy intern, who came to be known as 'Nirbhaya' (fearless), was gang-raped and savagely assaulted on the night of December 16, 2012, in a moving bus in South Delhi. She died of her injuries a fortnight later in a Singapore hospital.