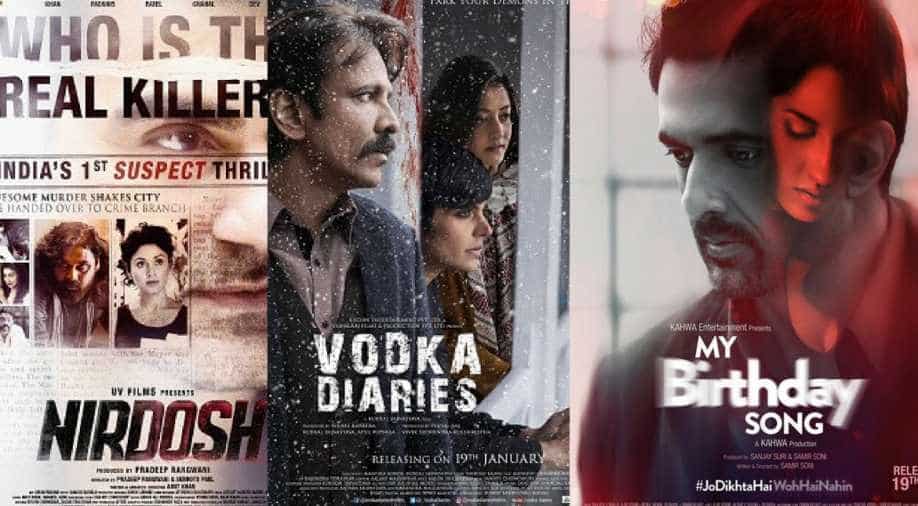 Posters of 'Vodka Diaries', 'My Birthday Song' and 'Nirdosh' as the three clash today in theatres. Photograph:( Twitter )

It's usually tough for small-budget movies to make a mark on the box-office unless backed with a great script that connects with the audience. But this week it gets tougher for small releases as big budget films "Padmaavat" and "PadMan" are scheduled to release on January 25.

Releasing today are three Hindi films -- "Vodka Diaries", "Nirdosh" and "My Birthday Song" which will just have a week to rake in moolah before "Padmaavat" and "PadMan" take centre stage in theatres worldwide.

For those who want to watch a movie this week, this is what Bollywood offers:

"Vodka Diaries" with an interesting promo and stellar actors Kay Kay Menon, Raima Sen and Mandira Bedi might turn out to be a good bet.

"Nirdosh", on the other hand, has Arbaaz Khan on screen with Manjari Fadnis, Ashmit Patel, Mahek Chahal and Mukul Dev in a thriller.

"My Birthday Song" sees Sanjay Suri and co. directed by Sameer Soni. The film is a psychological thriller and is aimed for niche audience at urban multiplexes.