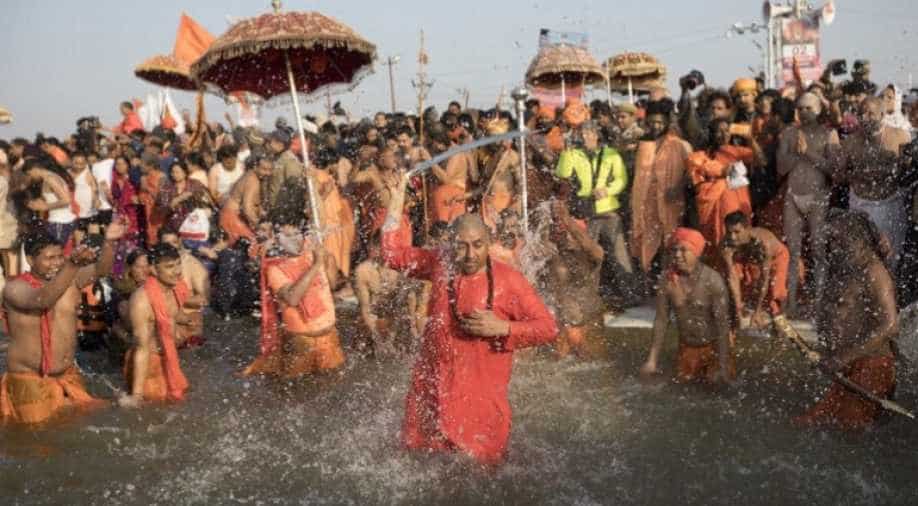 Indian sadhus (Hindu holy men) bathe at the Sangam — the confluence of the Ganges, Yamuna and mythical Saraswati rivers — on the auspicious day of 'Basant Panchami' at the Kumbh Mela in Allahabad. Photograph:( AFP )

Even before 2 am, a number of devotees were seen taking the exit route from the Mela area and searching for a mode of transport to reach their respective destinations.

Hours before sunrise, lakhs of devotees had already taken a dip in Sangam on Basant Panchami the third and final shahi snaan during the Kumbh.

Many were seen carrying the holy water of the Ganges, a sense of satisfaction reflected on their faces.

Even before 2 am, a number of devotees were seen taking the exit route from the Mela area and searching for a mode of transport to reach their respective destinations.

It was 1.45 am, and Rakesh Kumar, a resident of Banda, was heading home.

"The main reason to take the (holy) dip early was that I will get ample amount of time to reach home. The crowd was relatively less and hence there were no problems," he said.

Deepak Kumar, who runs a cafe and is a resident of Fatehpur district, said, "I took the dip at around 1.00 am. I now have time to explore the city. Apart from this, it also helps me in returning home in time."

The devotees appeared excited and the cold breeze sweeping the Sangam area could not deter their spirit. Chants of 'Har Har Gangey' and 'Jai Ganga Maiyya' filled the air around the venue. Visitors were also seen clicking selfies at various locations in the Mela area.

As the number of visitors began increasing, police officials issued instructions to them to take a specific exit route.

Siddh Pratap Singh Baghel, who came from Katni in Madhya Pradesh along with his friends Pramod Chaurasia and Brijesh Kumar Pandey, said, "Initially when we went to take a dip, the rush was relatively less. However, as soon as we came out, the number of devotees started increasing."

On their way back home, the three carried the holy Ganga water with them.

Residents of Bhadohi, Dharmendra Vishwakarma and his wife Malti Devi took the holy dip at around 12.30 am and were seen leaving the Mela venue before 2.00 am.

Dharmendra Vishwakarma said, "People had started taking a dip at around 12.30 am, and we were able to reach there in time. As we were leaving the ghat, we noticed the number of devotees reaching there increasing."

Shahi snaan at Sangam the confluence of Ganga, Yamuna and the mythical Saraswati is a central highlight of the Kumbh Mela.

The two previous shahi snaans were on Makar Sankranti on January 15 and Mauni Amawasya on February 4. And the third fell on Basant Panchami, which heralds the arrival of spring and is dedicated to Goddess Saraswati.

According to Mela administration, 14.94 crore devotees have visited the Kumbh so far.

Police are using gas balloons as an indicator for the public to locate the lost and found centres run by them.

The Kumbh Mela commenced on January 15 on Makar Sankranti and Mahashivratri on March 4 will mark its culmination.