Counting of votes in Meghalaya, Nagaland and Tripura to take place on Saturday amid tight security 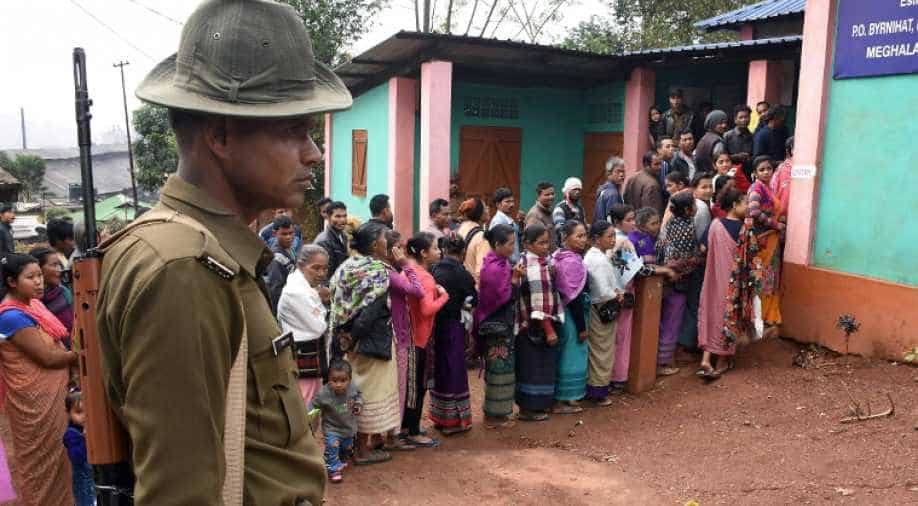 A security personnel stands guard at a polling booth in Ri-Bohi in Magalaya. Photograph:( PTI )

The counting of votes for the Assembly elections in three Northeastern states - Meghalaya, Nagaland and Tripura - will be held on Saturday amid tight security, officials said.

The BJP has emerged as a strong contender in all the three states and two exit polls have predicted that the party would dethrone the 25-year-old Left Front government in Tripura and consolidate its position in the other two states.

While the Congress has been ruling Meghalaya for 10 years, the Naga People's Front (NFP) has been in power in Nagaland since 2003, except for a three-month period of President's rule in 2008.

Buoyed by the formation of governments in Assam, Manipur and Arunachal Pradesh, the BJP is making a bid to expand its footprints in the region.

Counting would begin from 8 AM in all the states amid tight security, Election Commission officials said.

While Tripura went to the polls on February 18, elections were held in Nagaland and Meghalaya on February 27.

Though the strength of each of the Assemblies in the three states is 60 members, voting was held for 59 constituencies in all of them, for different reasons.

While a CPM candidate died in Tripura, a Nationalist Congress Party (NCP) candidate was killed in Meghalaya, which resulted in countermanding of the polls in one seat each in the two states.

In Meghalaya, the Congress fielded 59 candidates, while the BJP put up nominees in 47 constituencies. For the first time, Meghalaya Chief Minister Mukul Sangma is contesting from two seats.

In Nagaland, the BJP has joined hands with the NDPP that was floated by former chief minister Neiphiu Rio. The NDPP is contesting on 40 seats and the saffron party on 20.

The Congress, which has given three chief ministers to Nagaland since the state's inception in 1963, is contesting only in 18 seats, two less than the BJP.

The election process in Nagaland had started on a difficult note.

Following a no-poll diktat from the Core Committee of Nagaland Tribal Hohos and Civil Organisations that advocated "solution (to the Naga political issue) before election", political parties initially kept away from the poll process.

There was a heavy rush of nominees to file their nomination papers on the last day, February 7, and finally after scrutiny and withdrawal, 227 candidates were in the fray for the Assembly elections in the state.

"Adequate security measures have been made for the counting centres. Counting halls were also ready. General observers and police observers were appointed for all the counting halls," Additional Chief Electoral Officer of Tripura Tapas Ray said.

In Nagaland, 349 tables in 17 centres across the state would be set up for counting tomorrow, the Chief Electoral Officer (CEO), Abhijit Sinha, said.

Meghalaya Chief Electoral Officer F R Kharkongor said a three-tier security arrangement has been made at all the 13 counting centres and 11 companies of Central Armed Police Forces (CAPF) have been deployed here for the counting process.

China's hydropower project in Tibet a reason to worry for India