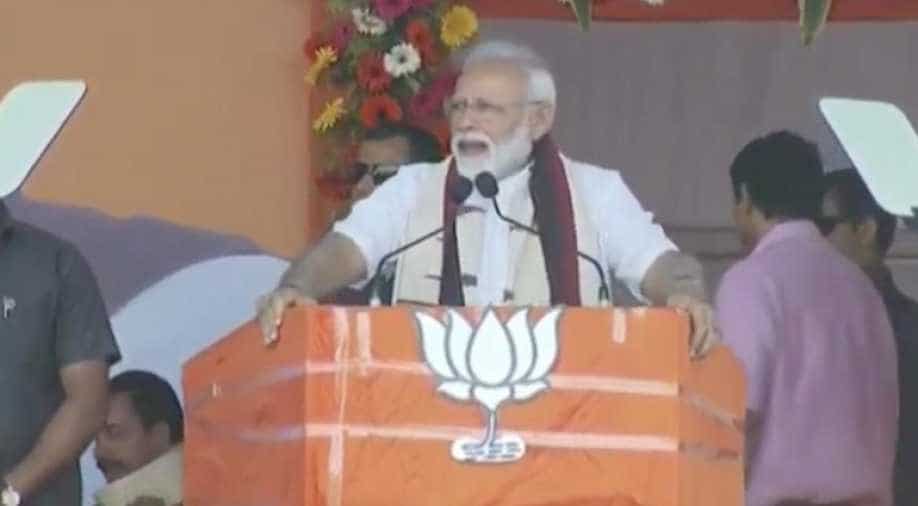 Prime Minister Narendra Modi Monday launched a broadside against the Congress, accusing it of branding "peace-loving Hindus" as terrorists and insulting those who follow the religion.

"Leaders of that party are now scared of contesting from constituencies dominated by majority (Hindu) population," Modi said.

His barb was apparently directed at Congress chief Rahul Gandhi, who will be contesting the Lok Sabha polls from Wayanad constituency in Kerala, besides Amethi in Uttar Pradesh.

"Congress insulted Hindus...People have decided to punish it in election...Hence, it is scared of fielding candidate from constituencies dominated by majority population," Modi added.

He accused the Congress and NCP of questioning the valour of soldiers and insulting them after the Pulwama terror attack and Balakot air strike.

These parties spoke language that was suitable to be used in Pakistan, he added.

Modi also hit out at NCP chief Sharad Pawar, who he said, chose not to contest the Lok Sabha election after deciding to do so first.

This was because the NCP chief sensed an unfavourable situation, Modi said, taunting the latter for "shying away" from poll fight.

Modi also claimed there was a family feud in the Pawar family and that Pawar was losing his grip on the party.

Modi also termed the Congress' "abuse" that he was a "chowkidar of toilets" as an "ornament" for him.