Kareena Kapoor, Saif Ali Khan criticised for not wearing masks as they step out with son Taimur 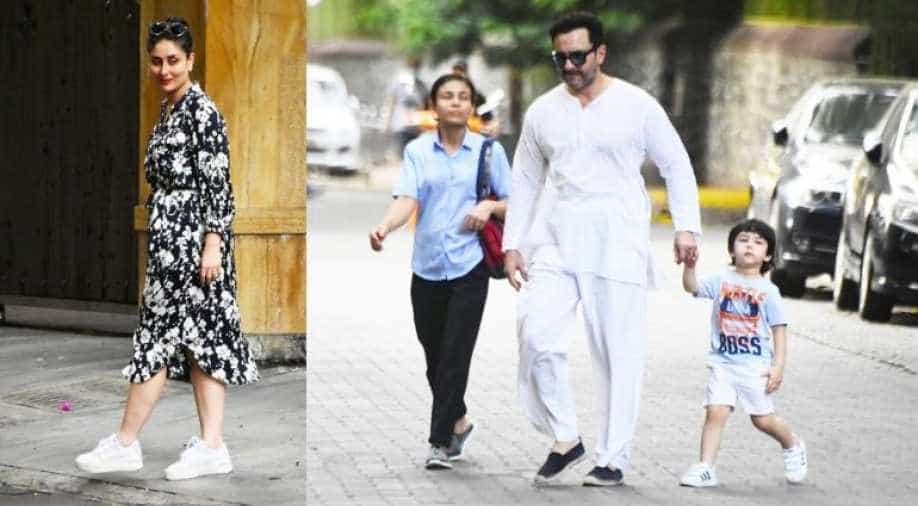 Kareena and Saif Ali Khan clicked outside their residence in Mumbai on Sunday Photograph:( Yogen Shah )

The couple was seen enjoying at Marine Drive but pictures making the rounds of social media show them without a mask on several occassion.

A day before the Indian government opened up public places after nearly three months of lockdown, actor couple Saif Ali Khan and Kareena Kapoor Khan stepped out with their son Taimur for a stroll at Mumbai's Marine Drive.

The couple and their son were accompanied by a nanny and were seen enjoying the breeze at the Marine Drive on Suday evening. Several photos and videos of the family have made it to social media and in some, the family is without any mask.

The pictures have drawn severe criticism from the fans. In the images shared online, Kareena is seen wearing a black printed dress and white sneakers. She wears a breathing mask for safety. The actress was seen holding son Taimur's hand who wore white T-shirt and shorts with matching shoes. Saif too was spotted with the mother-son duo and was dressed in white kurta pyjama. Both Saif and son Taimur were seen without masks on multiple occasions.

However, in another video, Saif is seen putting on a mask as he carries Taimur on his shoulders. In another set of pictures, the little one and Kareena can be seen wearing a breathing mask to protect themselves.

Fans dissed the couple for flouting rules. "Now I know why Mumbai is the most affected city by corona in India," wrote one fan on social media. "Without mask?" question another follower. "Wrong example they set in front of public..now some of them will come out just to stand on.the same spot," wrote another fan on the video post.

India and especially Maharashtra has seen a spike in cases of coronavirus even as the country has opened up public spaces. Maharashtra's positive cases as well as death toll has risen at an alarming rate.