Withdrawal of US forces in Syria likely to start in 'weeks': US army general 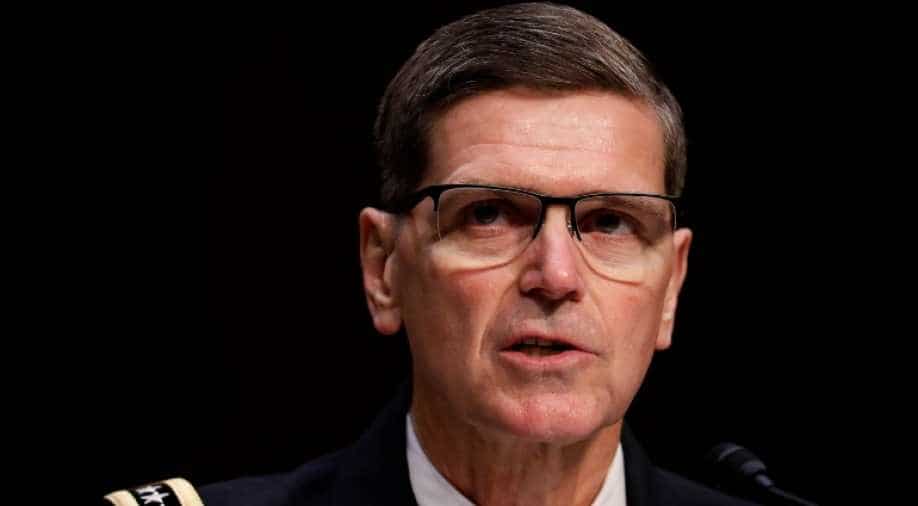 US Army General Joseph Votel, commander of the US Central Command. Photograph:( Reuters )

The US military has already started withdrawing equipment from Syria. Asked whether the withdrawal of America's more than 2,000 troops would begin in days or weeks, Votel said: 'Probably weeks. But again, it will all be driven by the situation on the ground.'

The United States is likely just weeks away from starting the withdrawal of ground troops from Syria ordered by President Donald Trump, the top US commander overseeing American forces in the Middle East said on Sunday.

US Army General Joseph Votel, head of the US Central Command, cautioned that the exact timing would depend on the situation in Syria, where US-backed fighters have launched a final assault against Islamic State enclaves near the Iraqi border.

The US military has already started withdrawing equipment from Syria. Asked whether the withdrawal of America's more than 2,000 troops would begin in days or weeks, Votel said: "Probably weeks. But again, it will all be driven by the situation on the ground."

"In terms of the withdrawal ... I think we're right on track with where we wanted to be," Votel told reporters travelling with him during a trip to the Middle East.

"Moving people is easier than moving equipment and so what we're trying to do right now is again (to) kind of clear out those materials, that equipment, that we do not need."

Trump's surprise announcement in December that he was withdrawing American troops from Syria helped trigger the resignation of his defence secretary, Jim Mattis, and sent US military officials scrambling to construct a withdrawal plan that preserves as many gains as possible.

Hundreds of additional troops have been sent to Syria to facilitate the withdrawal.

US officials have long estimated that the Syria pullout could take until sometime in March or April to execute fully, but have been reluctant to set an exact timeline given hard-to-predict battlefield conditions.

Votel did not speculate about when the drawdown would be completed.

One big question has been whether some US forces in Syria might move to neighbour Iraq, where the United States has more than 5,000 troops helping Baghdad fight Islamic State and prevent the group's resurgence.

Votel said he did not believe the United States would broadly increase overall troop numbers in Iraq. He did leave open the possibility of changing the composition of forces to help the United States keep pressure on the militant group.

Referring to future US troop levels in Iraq, Votel said: "I think it's going to remain more or less steady."

"This isn't just wholesale -- 'Everybody in Syria move over to Iraq.' That doesn't make sense," Votel said.

Votel is one of many current and former US officials who have warned of the risk of a resurgence by Islamic State unless the United States and its allies can keep pressure on the group following the US withdrawal. They say Islamic State still has enough leaders, fighters, facilitators and financial resources to fuel a menacing insurgency.

But a clear US plan on how to keep up the pressure has yet to be articulated. It is also unclear whether the United States will be able to satisfy the security concerns in Syria of its NATO ally Turkey without sacrificing the interests of US-backed Kurdish fighters there.

Washington views the Kurdish militia as loyal partners in the fight against Islamic State, whose help will likely continue to be needed to prevent the group's resurgence.

The Pentagon's own internal watchdog released a report last week warning about the risks still posed by Islamic State. It cautioned that absent sustained pressure, the group would likely resurge in Syria within six to 12 months and retake some limited territory.

A UN report seen by Reuters last week estimated there are up to 18,000 Islamic State militants in Iraq and Syria, including up to 3,000 foreign fighters. It warned the group was interested in attacking aviation and using chemical, biological, radiological and nuclear materials.